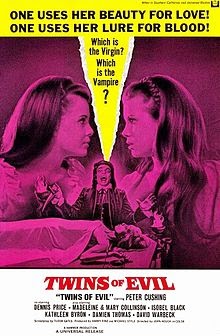 This, the third instalment of Hammer's Karnstein Trilogy, is a film that I have adored since before I first saw it. I was already a fan having read the House of Hammer comic adaption by Chris Lowder and Blas Gallego in the early eighties in an 'annual' called 'Dracula's Spinechillers' - the Twins of  Evil strip can be downloaded as a PDF from Alison Nastasi's site here - and absolutely loving it.  When I finally saw the movie it was everything I had hoped for.  Peter Cushing in full vampire slaying mode, debonair and despicable vampires and typically for Hammer at the time beautiful young ladies ripe for defiling.

Predating the two earlier Karnstein movies, Twins of Evil tells of the arrival in the town of Karnstein of orphaned twin sisters Maria (Mary Collinson) and Frieda (Madeleine Collinson) sent to live with their Uncle Gustav (Peter Cushing).  Unfortunately for the twins the town is plagued by two evils, Gustav and his zealous, puritan, witch-hunting 'Brotherhood' and the lascivious then vampiric actions of Count Karnstein (Damien Thomas). There is though the distraction of dashing school teacher Anton Hoffer (David Warbeck).

Cushing is at his fire and brimstone best here playing somewhat against type as a deeply unpleasant man who has been consumed by his beliefs and who can no longer see goodness in the world and refuses to accept anything other than his own 'truths'.  Thomas plays his Count Karnstein as louche and arrogant; brash and overconfident in his taunting of Cushing's Brotherhood, contemptible in his search for vampiric immortality, his callous disregard for others and his corruption of Frieda.  Neither of the Collinson twins display great acting ability but (with a few notable exceptions) this was never a key requirement for Hammer's early 70s leading ladies.

There are, of course, far better made, far better written and far better acted Hammer films but I just really love this one.  It's fast, overblown and fun and is one of a few films I can rely on to entertain me when nothing else is doing the trick.

If you enjoy what we do here on Wyrd Britain and would like to help us continue then we would very much appreciate a donation towards keeping the blog going - paypal.me/wyrdbritain
Posted by ian holloway at 19:05