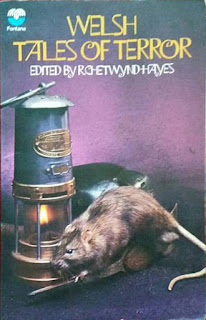 Inside what is probably the single most stereotypical portrayal of Welsh cliches ever to adorn a book cover this anthology of stories set in Wales, written by Welsh writers or regarding Welsh folklore turned out to be utterly fantastic.

Let's start by getting the various folktales out of the way.  These, here, take the form of teeny little half page stories relating things like 'The Brown Hobgoblin of Bedd Gelert', 'Dead Man's Candles', 'The Devil's Tree', 'Corpse Candles' and more.  They're fun little hints at the depth of Welsh folklore but little more than that.  For those wishing for a more in depth examination that's catered for with a chapter taken from Marie Trevelyan's early 20th century study 'Folk-Lore and Folk-Stories of Wales' that explores the phenomena of the 'Ceffyl-dwr' in 'Water Horses and the Spirits of the Mist'.

So, onto the stories.  There are a number of very enjoyable stories here but the book is helped no end by an exemplary opening trio of tales.  First up is Glyn Jones' 'Jordan', a story of an attempted swindle and the grim and unpleasant fate that befalls the perpetrators.  The second story is by one of my favourite authors, John Christopher, and is the first thing of his I've read that was neither science-fiction nor post-apocalyptic.  'A Cry of Children' is a subtle and deeply moving story with a brutal and breathtaking finale.  The golden trio culminates with Arthur Machen's 'The Shining Pyramid' with its folk horror and proto-Lovecraftian rural horrors from beyond.

There's a bit of a dip next with Angus Wilson's 'Animals or Human Beings' which despite being written in a very agreeable and jaunty style has a story that really does nothing interesting which is also the case with the ghost story 'The Man on a Bike' by Hazel F. Looker that follows it.

Regular readers of my write-us will know that I'm a bit of a sucker for a happy story and so in many ways 'The Morgan Trust' by Richard Bridgeman (a pseudonym of sci-fi writer L.P. Davies) ticked lots of my boxes with its story of a man on an obsessive quest finding what he's looking for in two remote Welsh towns.

Obsession is also at the heart of two more tales of Caradoc Evans' 'Be This Her Memorial' takes religious fervour in a small town to its extreme and 'The Lost Gold Mine' by Hazel F. Looker has a more obvious object of fascination.

Dorothy K. Haynes' contribution 'Mrs Jones' is a repurposed folktale of a woman kidnapped and forced to cook for the little folk of Gower.  It's lifted from the doldrums by the matching belligerence of both its victim and her erstwhile rescuer whose dislike of the woman and her domineering ways could be her downfall.

Ronald Seth's 'The Reverend John James and the Ghostly Horseman' is another story that feels like a repurposed folktale but unlike its predecessor has little charm or wit in its telling.

The books second story by Glyn Jones, 'Cadi Hughes', is a bit of a disappointment after the opener.  It has a great opening and a couple of fun moments but is ultimately a bit cruel and vindictive.

The final three tales pretty much capture the Wales I grew up in the 1970s dealing as they do with coal mining, religion and folk horror.  Jack Griffith deals with the first of these as he traps a group of men underground in 'Black Goddess' and we're left to decide for ourselves whether the supernatural aspect is more real than the insanity.  'The Stranger' by Richard Hughes drops a small demon into the household of a preacher and his peg-legged wife.  It tries for laughs amidst the temptations and the piety but I thought it all got more than a little jumbled at the end.

The book closes with editor R. Chetwynd-Hayes' own contribution, 'Lord Dunwilliam and the Cwn Annwn'.  It's the most 1970s thing here by far as it's Regency period setting and wild snowy moorland setting filled with obnoxious aristocrats, cackling peasants, beautiful maidens and ancient powers put me in mind of so many of my favourite Hammer movies.

I know there are lots of other books in this series covering different areas of the country (and indeed parts of the world) compiled by different editors all of which are now on my wants list but truthfully they are all going to have to be something special to live up to this one.
Posted by ian holloway at 11:47 2 comments: 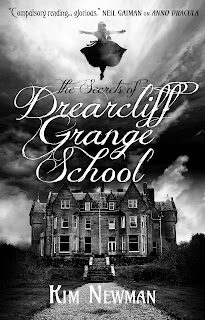 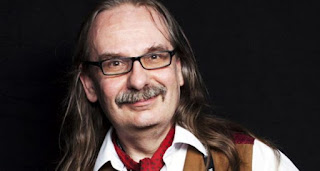 Posted by ian holloway at 09:42 No comments:

The Third Target Book of Horror 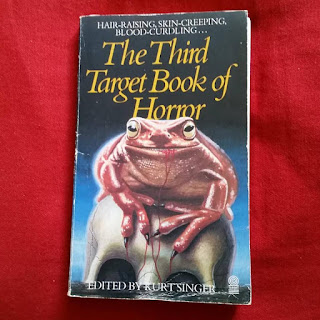 I have two books that are emblazoned with a toad on the cover.  The first was 'The Fontana Book of Great Horror Stories' which at least had a Nigel Kneale story in it that featured the creatures, this one just wanted the 'Urgh' factor.

It's a bit of a hodgepodge this one.  It opens well with one of Wilkie Collins' non-supernatural stories of duplicitous French gamblers in 'A Terribly Strange Bed' before things take a distinctly downward turn with 'Psychic Alert Saved Film Star' by Frank Stevens.  This 'factual' piece tells of the actress Elke Sommer and how a psychic premonition and a ghostly visitor saved her life on two separate occasions.

The book is right back on track with the muscular macabrery of G.G. Pendarves, 'The Dark Star', which pits an alienist with a penchant for the supernatural and muscularist (I think I might just possibly have made that term up) in a spiritual battle for the soul of the latter's beloved against an ancient ancestor inside a haunted painting.

Carl Jacobi's 'Portrait in Moonlight' is a colonialist voodoo tale complete with distasteful language that delivers a well earned comeuppance to it's unpleasant lead.

I rather enjoyed Richard Middleton's whimsical 'The Ghost Ship' with it's courteous and occasionally inebriated ghosts but it's impact is lessened by the subsequent descent into more spiritualism / ghost hunting (apologies if this sort of thing is your bag but it really isn't mine) with various ghost busting memoirs from Horace Leaf in 'I am a Psychic Detective' before the book ends well with Seabury Quinn's, 'The Cloth of Madness', that finds an interior decorator extract revenge via wallpaper.

Like I said at the top, a mixed bag but one that errs on quality and is a quick and, mostly, enjoyable read.
Posted by ian holloway at 10:31 No comments:

The Kingdom Under The Sea and Other Stories 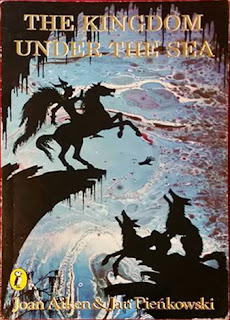 This lovely little Puffin book was the winner of the Kate Greenaway Medal in 1971 for Pienkowski's silhouette illustrations and it's not hard to see why as they run through the various stories perfectly augmenting the words as supplied courtesy of one of Wyrd Britain's favourite authors here retelling a variety of folktales from Eastern Europe in her own eminently readable style.

I'm not familiar with any of the stories but the iconic witch Baba Yaga in her mortar and pestle and with her chicken leg house makes an appearance - 'Baba Yaga's Daughter' - which gave me my first chance to actually read one of her stories first hand.  There's an interesting cross section of pagan and Christian stories with the Sun and various members of his family making several appearances - the title piece, 'The Sun God's Castle', 'The Reed Girl', 'The Sun's Cousin' - variously helping or hindering people in their quests or just out of the pickles they've found themselves in.  Alongside these we find a couple of Christian themed stories such as moralistic fable of 'The Pear Tree' and the devious prankster God presented in 'The Goose Girl' depriving Saint Peter of a party.


Pienkowski, I assume, has designed the book so that art and words are interlaced. His illustrations intertwined with the words, often holding and framing them; often drawing the reader's eye deeper into the pictures to, quite literally, read the story within.

As is ever the case with Ms. Aiken the tales are beautifully told in her typically light and dancing style and even though, as often seems to happen with folktales, much of the detail of the story is subsumed in the rush to the moral at the end she is still able to bring her storytelling expertise to bear and draw out the heart of each tale and craft them into a vibrant and delightful collection of stories that cross cultural, historic and geographic divides.

Buy it here -  The Kingdom Under the Sea