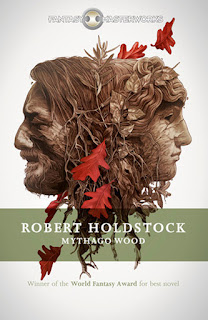 Deep within the wildwood lies a place of myth and mystery, from which few return, and none remain unchanged.
Ryhope Wood may look like a three-mile-square fenced-in wood in rural Herefordshire on the outside, but inside, it is a primeval, intricate labyrinth of trees, impossibly huge, unforgettable... and stronger than time itself.
Stephen Huxley has already lost his father to the mysteries of Ryhope Wood. On his return from the Second World War, he finds his brother, Christian, is also in thrall to the mysterious wood, wherein lies a realm where mythic archetypes grow flesh and blood, where love and beauty haunt your dreams, and in promises of freedom lies the sanctuary of insanity.

A little while back I had a real hankering for something featuring trees; something where a wood was central to the story.  Not just as a location but as a character, a defining point within the story.  I bought a couple of things I saw around - 'The Vorrh' and 'Wychwood' - but neither delivered the fix I wanted but as luck would have it a 'What are you reading?' post on the Wyrd Britain Facebook page brought this one to my attention and I'm so glad it did.

The wood of the title is Ryhope Wood in Herefordshire a tiny woodland that you could walk around in a couple of hours but which could take you a more than a lifetime to walk through - a TARDIS wood if you will.

The wood is one of the last remaining pieces of the ancient woodland that once covered the country - it is the very heart and soul of Britain - and in it can be found all the myths and legends of the land in the form of 'Mythagos', defined by Holdstock as "myth imago, the image of the idealized form of a myth creature".  Myths and legends created from and filtered through the minds of those intruding upon its confines; if, for instance, the defining consensus of Robin Hood is as the tights wearing, acrobatic, chivalrous righter of wrongs then that's the 'mythago' that will be presented but as the consensus shifts to perceiving him as a sadistic, arrogant woodland terrorist then...

The novel tells of Stephen Huxley's reluctant return to his family home following his experiences fighting in Europe during WWII.  The home where his recently deceased father had based his obsessive research on Ryhope Wood and where Stephen's brother Christian seems to be following in his footsteps.  Once there, as Christian disappears into the depths of the wood, Stephen begins his own journey.

At it's heart the book is a rumination on the centrality of legend, of myth and of story in the British identity.  The Wood encapsulates the entirety of the British mythic identity and feed it back to the observer.  The stories and their characters have a strength to them that enables them to both adapt and endure as can be seen through the actions of such mythagos as 'Guiwenneth' and 'Sorthalan' and in the way Stephen's own journey through the Wood, his quest for love and for revenge, acquires an increasing mythic resonance.

I also wonder if Holdstock was maybe making a more subtle point, an accusation of blame perhaps, as to the loss or lessening of the relevance of myths within British culture as it transpires that it is the arrival and actions of the 'outsider', (the) Christian, that is damaging the Wood and all it holds.

Mythago Wood proved to be that most rare of beasts a truly transformative novel.  One that took hold of me from the off and twisted and writhed and caressed and gnawed and stared and whispered and grinned and punched at me for the entire time I was reading and is still running riot around the back of my head several weeks later.

I adored this book,  unequivocally adored it.

If you enjoy what we do here on Wyrd Britain and would like to help us continue then we would very much appreciate a donation towards keeping the blog going - paypal.me/wyrdbritain
Posted by ian holloway at 17:25 No comments: