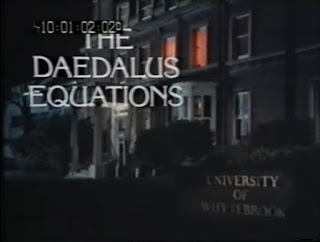 'The Mind Beyond' was a six episode series that screened between September and November 1976 as part of the long running Playhouse series.  We've featured a couple of other episodes from the series here in the past, the excellent 'Stones' and the odd 'The Man with the Power'.

This time out we meet Hans Deadalus (George Coulouris) a defected East German physicist whose death prompts a local psychic (Megs Jenkins) to begin receiving equations that she passes on to the dead man's colleagues.  The arrival of these equations trigger scepticism, confusion and accusations amongst those who worked with (Michael Bryant, Estelle Kohler & Richard Hurndall) and those who watched over (secret service operative Peter Sallis) Daedalus.

What we get is an intriguing stew that doesn't really have a clear idea of what it is, too much is thrown in the pot and it all starts to lose focus as it unfolds.  My guess is that it's trying for an intriguing ambiguity but doesn't quite manage it by being a little heavy handed particularly in the last third but it does manage to avoid coming to too firm a conclusion which is definitely in it's favour.

If you enjoy what we do here on Wyrd Britain and would like to help us continue then we would very much welcome a donation towards keeping the blog going - paypal.me/wyrdbritain
Posted by ian holloway at 12:11 No comments:

Email ThisBlogThis!Share to TwitterShare to FacebookShare to Pinterest
Labels: The Daedalus Equations, The Mind Beyond, TV Series

I first read some of Mann's work with his 'Newbury and Hobbes' steampunk series beginning with 'The Affinity Bridge'.  They were a pretty enjoyable romp through a Britain where Queen Victoria had been mechanised and, very underused, revenants stalked the streets.  After this I read his 'Ghost' pulp hero books and his War Doctor novel, the former was a big silly romp and the latter an entertaining Doctor Who tale that never really captured the spirit of the John Hurt character.

I guess what I'm saying here is that while I've enjoyed most everything of his I've read there's usually been some niggly little thing that's, certainly not spoilt, but bugged me about them; these books are no different.

) is the story of Elspeth Reeves a journalist returning to the small town she grew up in following the break down of both her relationship and her career in that there London.  Immediately on arrival she is drawn into a murder case being investigated by her childhood friend, Peter Shaw.

The murder, it transpires, is part of a series with an overtly magical purpose based on a local myth and it's around the magic that the story stumbles.  What we get is a story that seems stuck between two places; neither crime nor fantasy.  I like that for the protagonists that magic is hidden, alien, unlikely, absurd even but for the perpetrator it's ridiculously easy yet that he seems to only use it against women is a niggling annoyance that wasn't addressed and I really do think should have been.

) continues where the previous left off with Elspeth now more settled and ensconced in a relationship with Peter.  Like the first book here we have an odd mix of cop and horror tropes as an archaeological dig to exhume the remains of legendary local witch Agnes Levett coincides with a spate of murders in a small village.

Also, as with the previous volume, it's all a little frothy.  What you get in these books is a sort of daytime TV cop show version of a horror story, 'The Midsommar Murders' or 'Rosemary's Baby and Thyme' perhaps.  The stories are lively but there's not much here to chew on and the magic / horror elements feel just a little bit tacked on which is a shame.

Now, you may have noticed that I try and avoid writing negative reviews here on Wyrd Britain and I don't really want you to think that this is one.  As I said I generally quite like Mann's writing, he's writing is sprightly and very readable with a love of the pulps - here as much as ever - but this particular series, despite being on the surface right up my particular street is proving to be a bit of a cul de sac and personally I think I'm done but I also think that there's a lot going on here that many of you guys with a fondness for folk horror will really dig.

If you enjoy what we do here on Wyrd Britain and would like to help us continue then we would very much welcome a donation towards keeping the blog going - paypal.me/wyrdbritain
Posted by ian holloway at 11:23 No comments: 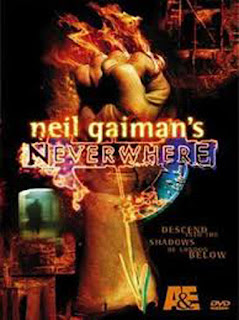 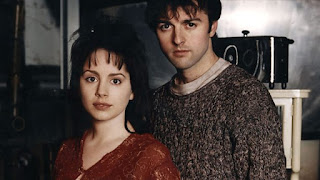 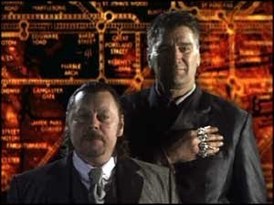 If you enjoy what we do here on Wyrd Britain and would like to help us continue then we would very much welcome a donation towards keeping the blog going - paypal.me/wyrdbritain
Posted by ian holloway at 12:23 No comments: