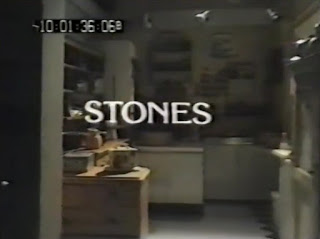 'Stones' was written by Malcolm Christopher (a joint pseudonym for Sir Malcolm Bradbury & Christopher Bigsby) in 1976 for the BBC 2 Playhouse series 'The Mind Beyond'.  It tells the story of a government minister's plan to move Stonehenge from Salisbury Plain to London's Hyde Park in an attempt to boost tourism and of the various forces that think that maybe this isn't what you'd call a good idea.

In common with much of Malcolm Bradbury's work 'Stones' is set predominantly in the realms of academia and here we find scholar Nicholas Reeve (Hammer Studios alumni Richard Pasco) in the midst of writing his book on Stonehenge whilst unbeknownst to him or his wife (Judy Parfitt) their young daughter Rebecca Saire (who would later briefly appear as Professor Quatermass' missing granddaughter, Hettie, in the 1979 John Mills revival) is having dreams and visions related to the henge and the unfolding plan for relocation and it soon transpires that she's not the only one.

The always wonderful John Wells as the linguist Porton gets many of the best lines and the film also features Gerald James (who many Wyrd Britain readers will know from a very similar role as George Tully in the 2nd Sapphire & Steel assignment (The Railway Station) as another henge researcher, Caradoc Hobbes, and, for the Grange Hill devotees out there we have Mr. Bronson himself, Michael Sheard as the police inspector. 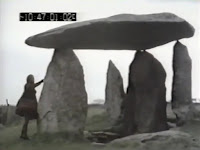 'Stones' is a witty and thoroughly enjoyable excursion into the realms of ancient magic and druidic language with it's cap tipped towards the works of Nigel Kneale and Arthur Machen and to then contemporary series such as 'Children of the Stones'.  Its obviously very limited budget laid serious constraints on the production but the end result is worth every penny they spent and every minute you'll spend watching.