The Devil Rides Out 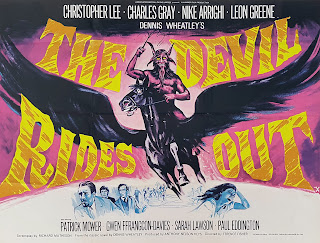 For Hammer, director Terence Fisher had a definite penchant for the classics having filmed various stories featuring Dracula both with and without his brides, Frankenstein and his various problematic patchwork monsters, mummies, werewolves, operatic phantoms, both faces of Dr Jekyll, the gorgon and even a couple of outings for Sherlock Holmes where the so called 'great detective' entirely fails to notice that he's transformed into Sir Henry Baskerville in the second one.

In this, one of his final films, Fisher introduced us to the aristocratic occultist 'Nicholas, The Duke de Richleau' (Christopher Lee) in an adaptation of Dennis Wheatley's 1934 novel.  Here, the noble Duke and his good natured compatriot 'Rex Van Ryn' (a dubbed Leon Greene) spring to the aid of another friend 'Simon Aron' (Patrick Mower) who along with the glamorous psychic 'Tanith Carlisle' (Niké Arrighi) has fallen under the influence of satanic high priest 'Mocata' (Charles Gray). 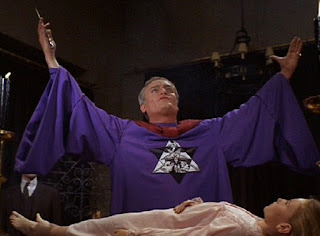 Often cited as Fisher's best movie it certainly is a fantastically entertaining black magic romp filled with magic circles, spells, demonic conjuring, high speed chases and timely interventions. The script by 'I Am Legend' author Richard Matheson is breathless and it's cast, also featuring future prime minister Paul Eddington, are faultless with Gray in particular dripping with malice - as an aside I heartily recommend you take the time to watch him eat a ghost in 'The Gourmet'.  I have always thought the ending to be something of a cop out but it's not a huge problem given how much fun the rest of the movie is.

Affiliate links are provided for your convenience and to help mitigate running costs.
Posted by ian holloway at 12:46 No comments:

The Secret of Dorian Gray 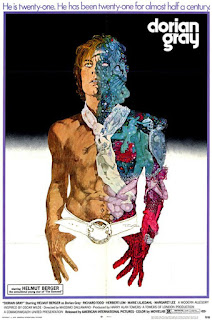 Co-produced by regular Jesus Franco producer Harry Alan Towers, the man behind the series of 'Fu Manchu' films based on the books of Sax Rohmer and starring Christopher Lee, 'The Secret of Dorian Gray' was an Anglo, American, Italian, German attempt at relocating Wilde's novel into the world of late 1960s London in what they describe on screen "A modern allegory based.on the work of Oscar Wilde".

European movie heart-throb Helmut Berger makes for a suitably callous and narcissistic lead ever youthful and rampaging across Europe in a hedonistic, orgiastic, spree as, back home, hidden away in the attic his portrait degenerates. Supporting him are two screen stalwarts in Richard Todd (Asylum, House of Long Shadows) as the artist 'Basil Hallward' and Herbert Lom (The Pink Panther) as corrupting influence 'Henry Wotton' both of whom help distract from the sometimes clumsy acting and dubbing of various members of the cast.

Admittedly I'm stretching my own rules here as this is barely a British movie but to my tastes it's mix of 60s Italian eroticism and the permissiveness of fashionable, swinging London with Wilde's fin de siècle classic makes for the perfect amalgam. And, combined with some fabulous set and costume design, the cinematographers eye of director Massimo Dallamano (who had worked with Sergio Leone on both 'A Fistful of Dollars' and 'For A Few Dollars More') and an amazing soundtrack from Peppino de Luca & Carlo Pes - played by I Marc 4 - this is a real favourite around here.

Affiliate links are provided for your convenience and to help mitigate running costs.
Posted by ian holloway at 12:56 2 comments: