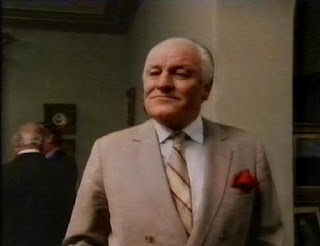 Charles Gray, who many will know as both Blofeld to Sean Connery's Bond and Mycroft to Jeremy Brett's Sherlock Holmes, plays the magnificently named Manley Kingston a gastronome of international repute who has dedicated his life to sampling all the foods the world has to offer.

In this story, written in the mid eighties (IMDB says 1984, BFI says 1987) by Nobel winner Kazuo Ishiguo, we find Manley on the verge of achieving his greatest wish and an end to his ennui; having tried and tired of everything within the natural world he at last turns his taste buds to the supernatural.

The script is subtle with any horror elements kept to an absolute minimum and what we have is an enthralling character study of greed and obsession and the mixed blessings of fulfilling ones fixations.  In a reflection of the times in which it was made we see the corpulent consumerism of Manley's existence in stark contrast to the poverty of many of those around him as he descends upon a church in the East End of London with the sole intent to inflict more damage and indignity on a deceased poor man of the parish whilst feeling absolutely no shame in admitting his actions to a homeless man (Mick Ford) who is essentially a modern day equivalent to that unfortunate.

Gray, almost never a leading man, dominates the screen here with his beautifully expressive face alive with ennui, haughty disdain and the foulest gluttony as he wanders through the world aloof from and all but oblivious to those around him, presumably his proclivities having reduced them to little more than cattle.

If you enjoy what we do here on Wyrd Britain and would like to help us continue then we would very much welcome a donation towards keeping the blog going - paypal.me/wyrdbritain
Posted by ian holloway at 12:50