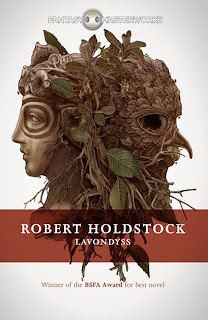 At the heart of the wildwood lies a place of mystery and legend, from which few return and none emerged unchanged: Lavondyss . . . the ultimate realm, the source of all myth.
When Harry Keeton disappeared into Ryhope Wood, his sister Tallis was just an infant. Now, thirteen years old, she hears him whispering to her from the Otherworld. He is in danger. He needs her help. Using masks, magic and clues left by her grandfather, she finds a way to enter the primitive forest and begin her search. Eventually she comes to Lavondyss itself, a realm both beautiful and deadly, a place in which she is changed forever.

Following on from the glorious 'Mythago Wood' the second book in the Ryhope Wood cycle takes a slightly different tack to it's predecessor.

Beginning shortly after the departure, in book one, of Harry Keeton into the depths of Ryhope Wood we here have the story of his little sister 'Tallis' and her quest to find and help him escape from it's confines.  In this she is aided by both the masks and the mythagos she creates along the way in a story that spans her entire life.

This time out Holdstock seems more interested in the role of place and landscape in myth and legend than he does in those that populate it.  Many of the characters and places are crude and at times bestial and here magic is at it's most primal, found literally within their bones, their twigs and their stones.

Life in the wood, as befits a realm made from the mythic collective unconscious of a nation, is tumultuous and brutish but in Tallis we have a guide whose understanding of the realm is instinctive having lived her entire life in it's shadow and it's very substance.

As a sequel Lavondyss is an odd sort of creation that takes two points from it's forebear and weaves them into it's narrative but I think considering it as a sequel does it an injustice. Lavondyss is a book almost entirely unto itself that tells a different sort of story and does so in a manner that is every bit as awe-inspiring as it's - let's call it a - companion volume.

If you enjoy what we do here on Wyrd Britain and would like to help us continue then we would very much welcome a donation towards keeping the blog going - paypal.me/wyrdbritain
Posted by ian holloway at 19:26