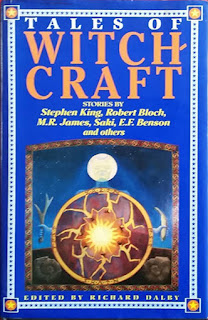 In the figure of the witch, our ancestors summed up their fears of nature, women, and social outsiders. Today, this archetype still possesses the power to disturb and unnerve us--especially in the hands of such masters of the horror genre as Saki, M. R. James, and Stephen King, all of whom are represented in this collection of seventeen tales.

Regular readers of Wyrd Britain will have noticed that I really like these anthologies of ghostly and macabre shenanigans.  This never used to be the case.  My prejudices against short stories were long held and ran deep but a few years ago I discovered the joy of the collection of spook stories and haven't looked back since.  Most of the ones I've read have been a worthwhile experience weighted to the better but a couple of them have shone through as being just a well put together collection - Mark Valentine's occult detective collection 'The Black Veil' and Susan Dickinson's 'Ghostly Experiences' spring immediately to mind - and today this one is added to the list as it turned out to be a thoroughly enjoyable read.

Opening the book is Saki's 'The Peace of Mowsle Barton' a characteristically witty little jape of petty tit for tat spell casting by gnarly old country women which is followed by M.R. James' 'The Fenstanton Witch' in, what was, it's first publication within the pages of a book.  The collection of James stories I own predates this so the story of young clergymen attempting an avaricious exhumation of a suspected witch was a real treat to read even if it's not the most refined of the great man's works.

N. Dennett's 1933 story 'Unburied Bane' tells of a nasty and spiteful hag in a remote, ramshackle cottage but does so with an ever so subtle possibility of just plain old delusional madness.  This is contrasted nicely with the next story, 'The Toad Witch' by Jessica Amanda Salmonson which is a beautifully poignant exploration of childhood imagination and loss.

Next is a writer who I've had the privilege of reading a few times recently, Ron Weighell, who unleashes ancient horrors on a remote convent in the terrific, 'Carven of Onyx' which is followed by A.M. Burrage's fine tale of gypsy revenge in 'Furze Hollow'.

In 'Miss Cornelius', W.F. Harvey tells a twisted little tale of possible madness or potential witchery.  Neither is really certain and the story is all the better for it.  Marjorie Bowen's 'One Remained Behind' on the other hand suffers from a slightly telegraphed resolution that is redeemed by the panache of it's telling.

One of the more disappointing inclusions is Robert Bloch's 'Catnip' which just tried far too hard to make something out of a terrible pun ending and the low point continues with Shamus Frazer's haunted tree story, 'The Yew Tree' before Stephen King gets everything back on track with his repulsive 'Gramma' and a young boys attempt to deal with the responsibility of caring for her.

Nathaniel Hawthorne, himself a descendant of one of those involved in the Salem witch trials presents a short story of regret, betrayal, sin, death and family in the 'The Hollow of the Three Hills' whereas for the narrator of Roger Johnson's 'The Taking' the sin is not his but the impulse to make amends is laid on him by a restless spirit which is a theme echoed by David G Rowlands', 'The Executor'.

Ronald Chetwynd-Hayes presents an amusing little story called 'The Day of the Underdog' which goes some way to proving that not every dog has it's day before the book ends with two stories of love being tested at the hands of devious old crones.  E.F. Benson's 'Gavon's Eve' is by far the better of the two and features lost love and the machinations of a necromantic witch.  The last, 'The Witches Cat' by Manly Wade Wellman would have been more at home in an issue of one of EC's horror comics.  It's not a bad little tale but it's a little too whimsical for the company it's keeping here and makes for an odd ending to the book.

So, with a couple of stories that were perhaps less than they could be and maybe seemed more so in light of how enjoyable the rest of the stories were, this collection proved to be a real treat filled with well sourced stories that haven't appeared in hordes of other anthologies.
Posted by ian holloway at 12:52 No comments:

The Right Hand of Doom & Other Tales of Solomon Kane 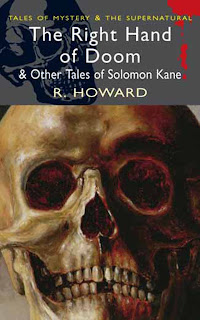 The sixteenth-century Puritan Solomon Kane has a thirst for justice which surpasses common reason. Sombre of mood, clad in black and grey, he 'never sought to analyse his motives and he never wavered once his mind was made up. Though he always acted on impulse, he firmly believed that all his actions were governed by cold and logical reasonings...A hunger in his soul drove him on and on, an urge to right all wrongs, protect all weaker things, and avenge all crimes against right and justice'.

I've never really had a hankering to read the Conan books.  The films were OK but I'm not much of a fantasy buff so the stories themselves held little appeal. The Solomon Kane stories on the other hand have always been an intriguing prospect.  The sword wielding puritan adventurer was always an enticing image.  The look of him always seemed correct to me for good, gutsy, godly vengeance type sword and sorcery romps.

The 10 stories and 3 (dreadful) poems that make up the book are - I believe - the entirety of the original Kane stories and tell of a man driven by his desire to serve his god by hunting down and dispatching evil wherever he finds it.  From his native Devon he travels several times to Africa battling murderers, rapists, pirates, vampires, flying creatures, slavers and an entire lost civilisation armed only with a sword, a couple of flintlock pistols and a magic staff given him by an African magician.

The stories are all pretty much the same as each time we join Kane at the culmination of a quest where with a last mighty effort of both iron will and iron limbs he reaches his goal and variously stabs, shoots or bludgeons his nemesis to death.  Howard takes great pains to repeatedly describe Kane's physical attributes giving the whole thing an unintentionally homoerotic quality which sits oddly next to some of the racism inherent in Howard's views of Africans although this certainly wasn't as bad as I was expecting it to be.

I was hoping for a big silly sword and sorcery romp filled with daring do and that's what I got.  The fact that it was all that I got was a little odd but here, now and in the particular mood I was in at the time it was enough, just.
Posted by ian holloway at 11:14 No comments: 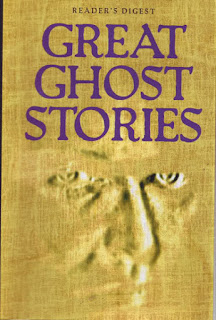 Readers Digest is one of those things that exists around you without ever really making any noticeable impact on your life.  I see their books occasionally and I remember a Simpsons episode where Homer got hooked on one but apart from that they're just one of those companies that exist somewhere doing something for someone who isn't me.  So, it was a bit of a shock when I stumbled upon this fantastic tome of an anthology.

Handily presented in alphabetical order the book provides us with a veritable who's who of ghostly fiction with stories from the likes of Robert Aickman, Algernon Blackwood, Charles Dickens, Elizabeth Gaskell, both the James' (M.R. & Henry), Edgar Allan Poe and Bram Stoker most of whom can be pretty much expected to make an appearance alongside less common compatriots such as Lord Dunsany here represented by the lovely 'Autumn Cricket', Cynthia Asquith's tale of redemption in 'The Corner Shop', Walter de la Mare's 'Seaton's Aunt' and the Chinese whispers of Emile Zola's 'Angeline, or the Haunted House'.

There's also a fine selection of stories by writers I was utterly unfamiliar with like Shamus Frazer whose 'Florinda' is a wonderfully macabre tale of an angry and vengeful spirit, Elizabeth Jane Howard who tells in 'Three Miles Up' an intriguing tale of friendship, enigmatic strangers and the perils of journeying into the unknown or Marghanita Laski whose short but terrifying 'The Tower' is a real highlight in a book filled with creepy delights.

This is a book that offers a veritable cornucopia of goodies and achieves an easy balance between the old, the new, the classic and the unknown.  It doesn't let itself get too hidebound by the word 'Ghosts' in the title and includes stories - like 'The Tower', 'Three Miles Up' or 'Ringing the Changes'- that are far from typical of the genre yet are intrinsically part of it's very fabric.

Opening the book and seeing the huge number of authors I knew I was going to enjoy working my way through it.  Just how much I enjoyed it though was a real treat to discover.
Posted by ian holloway at 12:21 No comments: