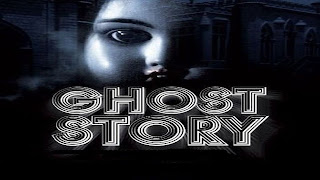 Three years after he made his directorial debut with the Jekyll and Hyde adaptation 'I, Monster' for Amicus Stephen Weeks took matters into his own hands with a script he co-wrote with Philip Norman and Rosemary Sutcliff that locates itself in that most classic of settings, the haunted house.

Three university acquaintances meet up at an uninhabited country pile for a weekend of shooting. The mismatched trio, wet and needy Talbot (Larry Dann), bullying Duller (Vivian Mackerrell) and aloof McFayden (Murray Melvin), are, we soon discover, barely on nodding terms and have been gathered together to test whether their presence in the house will bring forth the ghost. Living up to his name the blunt Duller, despite his fervent desire to see a ghost finds nothing but frustration and boredom,  MacFayden is unsettled but it's the sensitive Talbot who via a creepy porcelain doll is thrown back in time into the middle of the avaricious and incestuous history of the previous inhabitants of the house, brother and sister Sophy (Marianne Faithfull) and Robert (Leigh Lawson) and their maid Rennie (Penelope Keith) along with the doctor (Anthony Bate) and Matron (Barbara Shelley) of the nearby asylum. 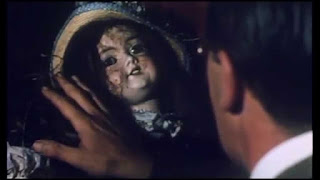 'Ghost Story' was obviously made on a budget much of which I suspect was used up on the odd decision to film mostly in India.  Weeks does conjure up an effectively creepy atmosphere via some unusual camera angles, some effective visual sleight of hand and a great score from Pink Floyd collaborator Ron Geesin but the film is poorly lit and let down by some truly desperate acting from the main cast and, particularly in the early part of the film some clumsy attempts at comedy.  It does have its moments though and as it builds to a climax there are some very effective moments including one sequence that put me in mind of the glorious hallucinatory ending of the Ealing classic 'Dead of Night' and in the final reckoning 'Ghost Story' provides some entertaining no budget creepiness.

Affiliate links are provided for your convenience and to help mitigate running costs.
Posted by ian holloway at 08:38 No comments: 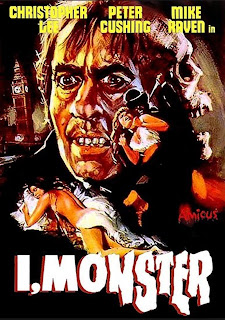 After Hammer studios had three goes at turning Robert Louis Stevenson's classic novella 'Strange Case of Dr Jekyll and Mr Hyde' into a movie ('The Ugly Duckling', 'The Two Faces of Dr. Jekyll' & 'Dr. Jekyll and Sister Hyde') each time without particularly bothering with the actual story Amicus decided to have a sneaky go at it despite not actually owning the rights.  To do this screenwriter (and studio head) Milton Subotsky decided to change the names of the main characters along with the title but keep most everything else the same, pretty subtle right?

In this version Freud obsessed psychiatrist Dr Charles Marlowe (Christopher Lee) invents a potion that "destroys the super-ego" rendering people either utterly docile, or competely amoral.  It's not long - following two human tests and an animal one that makes this very much not a film for cat lovers - before Marlowe is testing it on himself whereupon he transforms into a grinning, psycopathic, hedonist named Edward Blake.

'I, Monster' has long had a poor reputation mostly due to it's studio bound and slightly talky script and Amicus were never at their best when parroting Hammer's gothic pretentions but with a strong central performance aided by typically solid support from a much underused Peter Cushing and some fairly bog standard support from the reliably terrible Mike Raven it's a solid enough adaptation that's perhaps slightly over-reverential of the source material making it drag a bit as he stretches the story out to fill the run time.

Posted by ian holloway at 11:23 No comments: 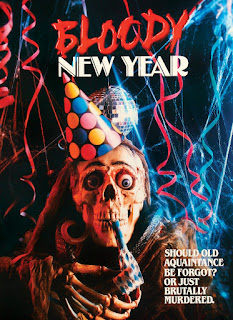 It's 1987 and in an improbable series of events five English teenagers and one American find themselves shipwrecked on an island after fleeing an angry trio of be-denimed fairground workers named Dad, Ace and The Bear.  On the island they discover a hotel all decked out to celebrate New Year, in June, where they each experience inexplicable events before falling prey to the spirits in the hotel and the angry fairground folk.

The cast are uniformly terrible and as such you'll be glad to see the back of them and will care little when they meet their timely demise.

This was the fifth and final horror that director Norman J. Warren made between 1977 ('Satan's Slave') and 1987 and is certainly the weakest.  It has some dumb fun ideas but unfortunately they're all ones we've seen before in better movies by the likes of Fulci and Raimi but if you think of it as a big silly tribute to the various things and folks it's cribbed from then it makes for a fun, relentlessly daft, ride.

Posted by ian holloway at 12:14 No comments: