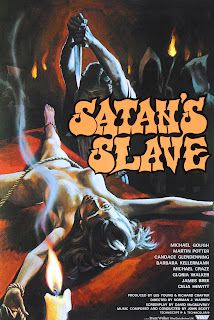 Travelling to visit the uncle and cousin she'd previously known nothing about - never a good sign - Catherine Yorke (Candace Glendenning - 'Tower of Evil' (UK / US) & 'The Flesh and Blood Show' (UK / US)) is involved in a car crash that kills her parents.  Recuperating in her Uncle Alexander's mansion and getting to know her creepy and psychotic cousin Stephen (Martin Potter) whilst experiencing vivid flashbacks to the torture and murder of a young woman she remains entirely unaware of their true nature and the plans they have for her.

'Satan's Slave' with it's country house and it's nefarious necromancers owes a debt to the films of the Hammer and Amicus studios and the books of Dennis Wheatley but this is pure 1970s hexploitation never missing an opportunity to put a male character in a robe or to get a female character out of hers.  Neither Glendenning nor Potter have much in the way of screen presence but Michael Gough with his effortless portrayal of the suavely devilish Alexander and Barbara Kellerman as his secretary Frances both have talent to spare. 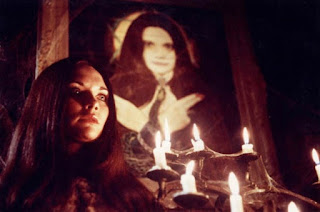 The story moves at a snail's pace and there really isn't enough here to fill it's 80 minute runtime and would have benefitted from losing 20 minutes or so but as a low budget schlock horror with it's toes dipped in both the Brit horrors of the past decade and the new Euro horrors of the (then) current decade it's an interesting and fun watch.

Affiliate links are provided for your convenience and to help mitigate running costs.
Posted by ian holloway at 12:56