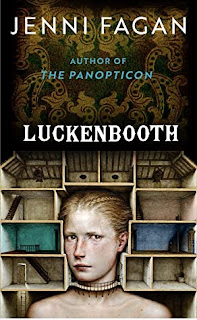 The devil's daughter rows to Edinburgh in a coffin, to work as maid for the Minister of Culture, a man who lives a dual life. But the real reason she's there is to bear him and his barren wife a child, the consequences of which curse the tenement building that is their home for a hundred years. As we travel through the nine floors of the building and the next eight decades, the resident's lives entwine over the ages and in unpredictable ways. Along the way we encounter the city's most infamous Madam, a seance, a civil rights lawyer, a bone mermaid, a famous Beat poet, a notorious Edinburgh gang, a spy, the literati, artists, thinkers, strippers, the spirit world - until a cosmic agent finally exposes the true horror of the building's longest kept secret. No. 10 Luckenbooth Close hurtles the reader through personal and global history - eerily reflecting modern life today.

I really wanted to like this book a lot more than I did.  Beyond the unlovely cover art it sounded right up my street but the end result was a bit of an infuriating mess.

Jessie arrives at No.10 Luckenbooth Close having been sold by her father to Mr Udnam in order to bear him a child. Jessie's father though happened to be the Devil, now dead by Jessie's hand, so things are unlikely to go the way Udnam hopes.  The story of what happens to her and to the subsequent residents of the house over the next 90 years makes up the rest of the book.

Presented in three parts with each part split again in three we are treated to a series of vignettes, snapshots of lives in flux.  Sometimes these stories are engrossing - particularly when dealing with the supernatural as in the stories of Agnes and Dot - sometimes they are delicately lovely - Ivor - sometimes intriguing - William - sometimes bloody stupid - Queen Bee - and sometimes riddled with irritating factual errors that could have been easily avoided with the most rudimentary research - Levi.

Fagan's writing is personable and the setting is characterful but it often it feels like being squandered and was saved from being a bit of a frustrating non-event by a couple of it's better chapters and a solid ending.

Affiliate links are provided for your convenience and to help mitigate running costs.
Posted by ian holloway at 20:40