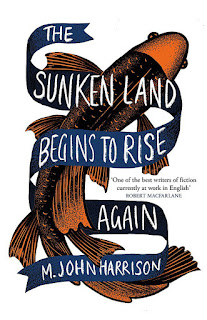 M. John Harrison
GollanczShaw had a breakdown, but he's getting himself back together. He has a single room, a job on a decaying London barge, and an on-off affair with a doctor's daughter called Victoria, who claims to have seen her first corpse at age thirteen.
It's not ideal, but it's a life. Or it would be if Shaw hadn't got himself involved in a conspiracy theory that, on dark nights by the river, seems less and less theoretical...
Meanwhile, Victoria is up in the Midlands, renovating her dead mother's house, trying to make new friends. But what, exactly, happened to her mother? Why has the local waitress disappeared into a shallow pool in a field behind the house? And why is the town so obsessed with that old Victorian morality tale, The Water Babies?
As Shaw and Victoria struggle to maintain their relationship, the sunken lands are rising up again, unnoticed in the shadows around them.

From his unlovely and lonely bedsit Shaw lives a life of dislocation and vague disinterest.  His life is stalled and he has little interest in restarting it.  A chance meeting in a graveyard nets him a new job delivering mysterious but seemingly mundane parcels around the country, attending séances and answering the phones on a barge-cum-office for a one man publisher / website.

Meanwhile, Shaw's occasional lover Victoria has taken up residence in her deceased mother's house in the Midlands where she meets a cafe owner with a fondness for water and the strange group that make up her (Pearl's) extended family.

Essentially we are treated to two views of a series of events as enigmatic as any Robert Aickman story and throughout I couldn't shake the feeling that what I was reading was a 21st century British reinvention of Lovecraft's Innsmouth stories as strange, aquatic beings slowly populate the land.  It's far less straightforward than that though as Harrison avoids explanatory clichés and amidst the strangeness tells a very human story of obsessions, of strained and confused personal interactions and of the difficulties of communication in a time when it is essentially easier than ever to reach out but perhaps harder than ever to be heard and understood.

Affiliate links are provided for your convenience and to help mitigate running costs.
Posted by ian holloway at 12:19