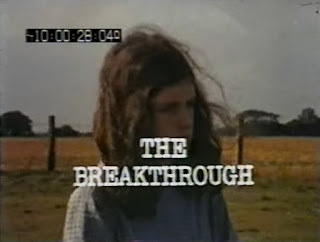 In an intriguing melding of science fiction with the supernatural this mid 70s adaptation of Daphne du Maurier's short story tells of a top secret research team and their attempt to create a machine that can harvest and contain the life force or soul of a person at the moment of death.

Boasting a strong cast featuring Simon Ward and Clive Swift (an actor with an impeccable Wyrd Britain pedigree) 'The Breakthrough' is concerned with the eternal question of mortality and of the more tangible questions of scientific ethics and human compassion at which it makes a bold if slightly facile stab at answering.  That said, in it's production it has a flavour of Nigel Kneale's 'The Stone Tape' about it and is a very watchable piece.

If you enjoy what we do here on Wyrd Britain and would like to help us continue then we would very much appreciate a donation towards keeping the blog going - paypal.me/wyrdbritain
Posted by ian holloway at 11:04 No comments: 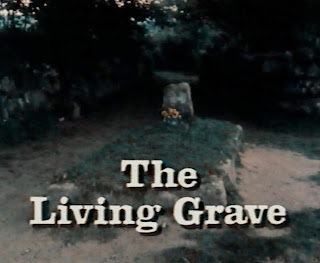 'The Living Grave' was made for 'Leap in the Dark' a TV series with supernatural themes throughout the 1970s and into 1980 that featured stories that were a mix of fact and fiction.  This episode from 9th Sep 1980 was written by David Rudkin (of Penda's Fen fame) and is based on the legend of 'Jay's Grave' (also 'Kitty Jay's Grave') on Dartmoor that legend says is the last resting place of someone who had died by suicide where fresh yellow flowers are mysteriously laid by unknown hand every morning.

Rudkin's approach, as would be expected from anyone familiar with his work, is anything but typical.  He makes no real attempt to examine, explore or explain the legend an instead bases his narrative around the 'memories' of a nurse regressed through hypnosis which he intersperses with a tour of the locale by both an investigator and through the eyes of Kitty herself as she approaches her end. 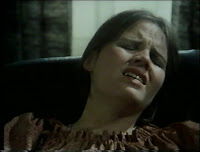 It's a bit of an oddity and stylistically feels very much of it's time but that's no bad thing as shows (and writers) as narratively uncompromising as this are few and far between and whilst this isn't, perhaps, Rudkin in full flight it's certainly a very watchable example of his work and an intriguing take on the retelling of a folktale.

BTW - You can find another episode from 'Leap in the Dark' in the form of Alan Garner's 'To Kill a King' here.

If you enjoy what we do here on Wyrd Britain and would like to help us continue then we would very much appreciate a donation towards keeping the blog going - paypal.me/wyrdbritain
Posted by ian holloway at 11:46 2 comments: 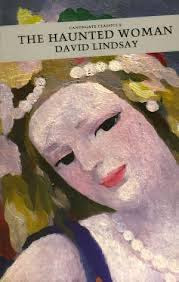 Unfulfilled young Isbel Loment is companion to a wealthy spinster aunt. Their lives consist of an endless tour of hotels. In search of a place to settle her aunt, so she herself can be free to marry her fiancé, Isbel visits the house of an older man, Judge, which comes complete with rumors of a ghostly staircase that appears only at certain times or to certain people. Isbel sees the staircase & ascends it to a region of the house where her perceptions of herself, & others, alter, with profound consequences for her everday life.
Lindsay is now a recognisable name in classic sci-fi circles for his book 'A Voyage to Arcturus' which at the time of release sank almost without trace and was only posthumously acclaimed but having just read 'The Haunted Woman' I'm left wondering if this book also needs it's moment in the sun.

The story centres around Isbel Loment who, with her aunt, Mrs Moor, lives a nomadic and fairly meaningless existence moving from hotel to hotel.  Whilst in Brighton, and through Isbel's fiance Marshall they discover the availability of a house into which Mrs Moor might settle upon Isbel's marriage.

The house, owned by a widower named Judge has a secret,  a staircase, visible only to some that leads to three rooms.  The first room contains a mirror, the second a sofa and the third a window through which can be seen a view of an idyllic valley in which sits a musician playing an unfamiliar instrument.  The first room allows Isbel to see her true self, the second provides an environment where social masks can be dropped and truer nature's expressed and the third almost forcibly strips them of their reservations presenting them with the full expression of their deeper feelings away from the confines of everyday society.

The social mores of their everyday world seem archaic and even at the time were probably a little old hat but as an examination of the ways in which conventions govern our lives and the ways in which we surrender to them as seen in Isbel and Judge's amnesia upon descending the stairs as they are literally forgetting themselves which seems, at least for Lindsay, to be eminently preferable to the alternative.

Perhaps Lindsay's own fear of emotional commitment lies at the heart of the book's bleak ending or perhaps it's a comment on the wisdom of fully revealing ones true self as then you'll see the terrifying other self.

Affiliate links are provided for your convenience and to help mitigate running costs
Posted by ian holloway at 21:48 No comments:

Tales of Horror and the Supernatural 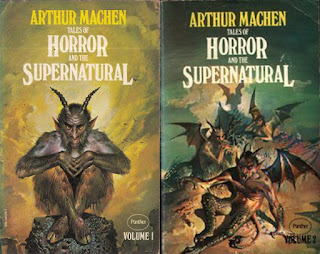 The copy of this collection that I've just emerged from is the two part paperback edition published by Panther Paperbacks in the mid 1970s that reprints the 1960s collection of the same name (also published more recently by Tartarus Press).

Volume 1 contains the real classics - 'The Great God Pan', 'The White People', 'The Inmost Light', 'The Shining Pyramid' and 'The Great Return'  - all of which I've read either several times over or quite recently.  Volume 2 has it's share of well known Machen's also with 'The Bowmen' and the two longer tales from 'The Three Imposters' - 'The Novel of the Black Seal' and 'The Novel of the White Powder'  - but these are followed by some later and less well known - at least to me - stories, some of which I've read but am very happy to do so again. 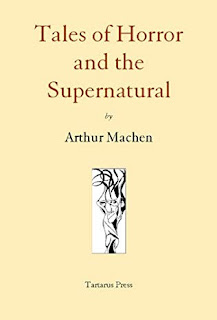 Stories such as 'The Happy Children' with it's revenant celebrating kiddies and the mysterious deaths of 'The Terror'; the latter a much more developed tale than the former but both equally as powerful in their telling.  Also included is the prototype for 'The Green Round', 'Out of the Earth' which is an interesting if perhaps inessential story especially if you are familiar with it's bigger brother.

'The Bright Boy' is the oddity here. A slightly incoherent and silly tale tale of corrupt individuals and overly elaborate schemes has little to recommend it.  Better - much better - but still a little unsatisfying is 'The Children of the Pool' where Machen sets up an intriguing and uncomfortable rural horror which he then allows to peter out amidst a host of rationalisations.

The big draw for me was the presence of the story that's been described as the gem of Machen's later work.  'N' is an almost psychedelic story of alternate realms and the thin place in a drab London suburb where an unearthly garden is visible to some of it's inhabitants.  It's a delight and offers another welcome glimpse of Machen's explorations of world's parallel to our own.

On it's own volume 2 proved to be a fantastic read but in conjunction with the first as originally intended it is a thing of sublime wonder.

Buy it here -  Tales of Horror and the Supernatural

If you enjoy what we do here on Wyrd Britain and would like to help us continue then we would very much appreciate a donation towards keeping the blog going - paypal.me/wyrdbritain
Posted by ian holloway at 20:07 No comments: