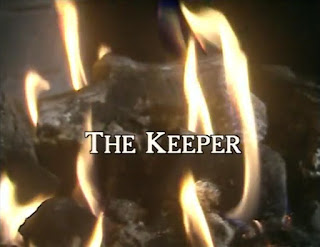 'The Keeper', written by Alan Garner, was the final episode of the original 'Spooky' series of the long running Dramarama series, an anthology show for children.

Garner's story concerns 'Beacon Lodge' a dilapidated and long abandoned gamekeeper's lodge where two paranormal researchers - Peter (Tim Woodward) and Sally (Janet Maw) -  settle themselves in for the night.  We know right from the off that there is something already resident, and comfortably at home, in the house and it's not best pleased at the the arrival of the interlopers. A game of scrabble and a poem set the scene for the conclusion as the secret of the house is revealed. 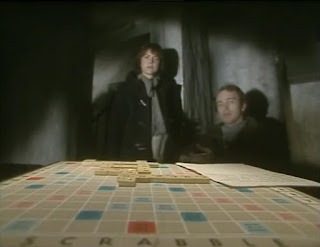 At the heart of the story is a typically Garner tale of the power that resides in the land, an animistic presence that holds sway over the patch of earth.  It's a short little tale that uses many well worn tricks to build suspense - eerie acoustic instruments, predominantly a dulcimer, and a restless camera that's constantly circling and hovering just behind the Peter and, particularly, Janet - but it must be remembered this is a show made for kids for whom many of these tricks of the trade would be new and also they are well worn because they work.

A genuinely scary story from that golden age of kids television when film-makers had literally no qualms about utterly terrifying their young audience.

Mr Humphreys and His Inheritance (1976) 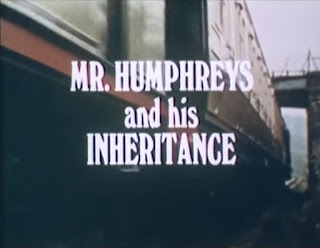 'Mr Humphreys and His Inheritance' is a short story written by M.R. James that was included in his second anthology 'More Ghost Stories'. It's my understanding that it was written to bulk out that collection which would make sense as it really does pale in comparison to most of the other tales in that collection.

The gist of the tale is obvious from the title with the inheritance in question being a large house and it's accompanying maze; a maze it seems only Mr. Humphreys can easily navigate and which has at it's centre an enigmatic, inscribed globe. 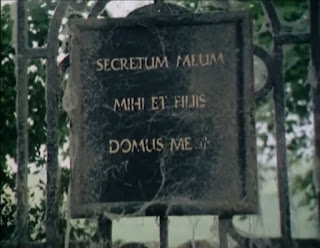 This adaptation was made in 1976 as an ITV schools programme - for those not raised in the UK in the 1970s these were shows made and shown during the daytime with an educational bent that could be used by teachers to distract the kids as they had a sneaky tea and cigarette break - as part of a series called 'Music Scene' whose purpose was to highlight the importance of incidental music to a production which in this context puts modernist tootling over typically Jamesian imagery. It sometimes makes for an odd fit but, for me at least, made a nice change to the usual overblown, portentous, pseudo classical violin sawing that film-makers often smother everything in.

With a run time of only 17 minutes the makers have amalgamated many aspects of the source material and discarded others entirely but they've created an engaging little film that manages to conjure up some nicely claustrophobic sequences within the maze - the point where the incidental music is at it's most effective - and a nifty and creepy animation sequence that looks like the opening of a 1970s Doctor Who episode but with the Doctor replaced with Peter Pratt's melty face version of The Master. 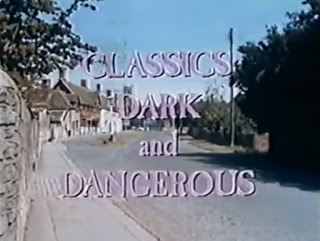 Adapted from an E.F. Benson story of the same name 'Mrs Amworth' is a modern vampire tale that finds the titular lady - played with flamboyant aplomb by the fabulous Glynis Johns - both beguiling and terrorising a small English village but finding her match in retired professor  Francis Urcombe (John Phillips).

Apparently made as part of a series of 6 adaptations by the likes of L.P. Hartley, Robert Bloch, Sir Arthur Conan Doyle, D.H. Lawrence and Issac Asimov called 'Classics Dark and Dangerous' it seems to have only made it to screen here in the UK for one brief half hour back in 1975 although the various episodes were later amalgamated into two straight to video movies - in this case 'Three Dangerous Ladies'.
(My thanks to the good folks over at the 'Taliesin Meets the Vampires' blog for providing this info)

There're no real chills here but it's got some great music and it's tiny run time means not a second is wasted with a cast of rock solid character actors playing very much within type to produce an understated but fun little treat.

If you enjoy what we do here on Wyrd Britain and would like to help us continue then we would very much appreciate a donation towards keeping the blog going - paypal.me/wyrdbritain
Posted by ian holloway at 10:22 4 comments: 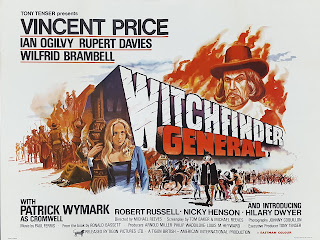 Witchfinder General was the third and final film by Director Michael Reeves before his death from a barbiturate overdose and stars his childhood friend Ian Ogilvy and is based on a fictionalised account of the life of self appointed 'Witchfinder General', Matthew Hopkins, played here with sleazy conviction by Vincent Price.

Following the witchcraft accusation and hanging of a priest, 'John Lowes' (Rupert Davies) and the rape of his niece (and Ogilvy's fiance) 'Sara' (Hilary Dwyer) by Hopkins and his brutal assistant John Stearne (Robert Russell) Ogilvy's roundhead officer 'Richard Marshall' sets out looking for revenge against the despicable duo. 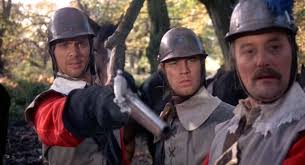 Reeve's vision of Civil War era England is one adrift in political turmoil, rife with misogynist superstition and in the thrall of the charismatic Hopkins.  Both the world he conjured and the film he made are unrelentingly and unrepentantly brutal; with the exception of the short burst of hammering as a gallows is constructed the film opens and closes to the sound of screaming with little respite in between.  The fact that it is mostly shot, presumably for budgetary reasons, mostly in daylight and amidst the bucolic delights of the English countryside only adds to the intensity of the experience as every act of callous violence is thrown into stark relief.

If you enjoy what we do here on Wyrd Britain and would like to help us continue then we would very much appreciate a donation towards keeping the blog going - paypal.me/wyrdbritain
Posted by ian holloway at 08:56 No comments: