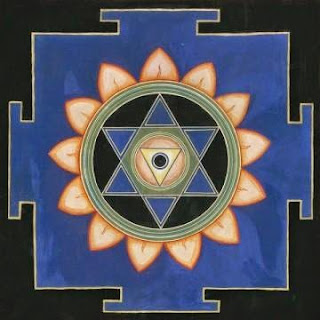 (Lotushouse Records LHRCD19)
CD
The first time I played this CD I fell asleep. Not, you may think, the most auspicious first impression but it was a very nice sleep indeed - what wasn't so good was the bit where I woke up with my head slumped sideways over the arm of the chair with the worst pain in my neck. The sleep though, was deep and dark and profound. I'd got to about halfway through the album's 14 minute epic journey towards 'Infinity' and then I was gone. They'd taken me with them, entirely.

What we have here is a UK duo of Mark Pilkington on modular synth & electronics and Zali Krishna on electric sitar &amp; guitar who have produced a set of intensely celestial kosmische jams; some live, some studio. The occasional presence of the sitar means that a vaguely Indian aspect is often shown (as is also implied by the bands name) but it is Germany of the very early 1970s that is most apparent.

With a running time of an hour and with a concise palate, many of the tracks, once the music starts to permeate the room, do run into each other and the whole becomes more important than it's parts as they paint a really rather glorious psychotropic colourfield. There are moments I'm not hugely enamoured with but even these parts often swirl by once it's achieved consonance with the room (and my head) and they are few and far between.

I've had this album here for just under a week now and it has pretty much dominated my ears since it arrived with the disc being carried from house to car and a rip sitting front and centre on my MP3 player. If big, bold Krautrock inspired kosmische excursions are your bag then really do hunt this down cause you'll love it. If they're not, hunt this down anyway because it's great and it may change your mind.


NB -  This review originally appeared in the pages of one of my other blogs - http://ian-quietworld.blogspot.co.uk/
Posted by ian holloway at 12:10 No comments: