40 years of The Galaxy's Greatest Comic 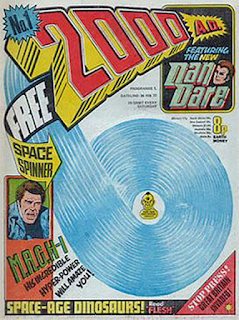 Formed at the same time as the nascent punk movement in the UK 2000AD tapped into the same zeitgeist.  It was big, bold, bloody, beautiful and bonkers and for 4 decades this weekly anthology comic has been providing us with work from some of the worlds top comic creators.  The role call of contributors is mind blowing, Alan Moore, Kevin O'Neill, John Wagner, Pat Mills, Alan Grant, Brian Bolland, Bryan Talbot, Simon Bisley, Garth Ennis, Neil Gaiman, Dan Abnett, Grant Morrison and so many more.  All of these guys - and it was almost exclusively guys, women creators have always been horrendously under-represented in comics generally and 2000AD in particular - would go on to define how comics looked and what they said from the late 20th century on.

It also provided us with the single greatest panel in comics

and two Dredd films of varying quality (we heartily recommend the Karl Urban one).

Over the 40 years I've been an occasional reader of the weekly comic but am an avid reader of the graphic novels.  Many of the classic 2000AD stories have been collected together in phone book (anyone remember phone books?) sized collections and the publisher - Rebellion - continues to issue nicely produced collections of more recent stories.

So, happy 40th birthday 2000AD.  Wyrd Britain thanks you from the bottom of it's dark heart especially as you were a big reason it's like that in the first place.

Posted by ian holloway at 12:38 No comments: 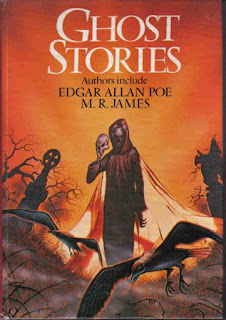 Twenty-two exciting stories from the twilight world of haunted houses and hair-raising spectres are contained in this spine-chilling anthology.
Each tale is illustrated with specially commissioned drawings.

The more of these anthologies I read the quicker I get through them.  They're generally a fairly fast read anyway being short stories but in many cases the same stories appear again and again and again.  In the case of this 1984 collection from Cathay Books I already knew 12 of the 22.  Some, like M.R. James' 'A School Story' and Captain Frederick Marryat's 'The Phantom Ship' I skip past on a fairly regular basis but as these things are meant to entice (as opposed to being a warning to) the curious into the charms of the genre that's something that one has to accept.  With that being the case the above are fine inclusions as are other regulars such as Hugh Walpole's poignant 'A Little Ghost', Lovecraft's non mythos short 'The Music of Erich Zann', the unsettling presence of the cupboard in Algernon Blackwood's 'The Occupant of the Room' or Fritz Leiber's sooty city spirit in 'The Smoke Ghost'.

Elsewhere in the book the unidentified editor has made some fine, if maybe a tad unadventurous, choices.  Charles Dickens is represented by his macabre tale of avarice and murder, 'The Ghost in the Bride's Chamber' wherein a murderer is forced to feel the intensity of his punishment increasing with each passing hour of the night which is far more than the guilty party at the heart (if you'll excuse the pun) of Edgar Allan Poe's 'The Tell-Tale Heart' would have ever managed to endure.

The conclusion of Poe's tale signals the start of a run of rather inconsequential stories,  the black magic cat of R. Chetwynd-Hayes' 'The Cat Room', Catherine Crowe's somnambulist clergyman in 'The Monk's Story' and Saki's weakly witty 'Laura' before we hit a rich vein of the standards that I mentioned earlier.

The book makes another move towards the lesser known with Rosemary Timperley's tale of infatuation and fire, 'The Mistress in Black' and Guy de Maupassant's creepy little oddity, 'An Apparition'.

Undoubtedly the oddest inclusion here is an utterly pointless extract from Penelope Lively's 'The Ghost of Thomas Kempe' but it's easily skipped for the aforementioned Blackwood story and Jerome K. Jerome's practical joking ghost of 'The Haunted Mill'.

One of the biggest draws here was the opportunity to read something by another of the Le Fanu's.  The venerable Sheridan is here with 'The White Cat of Drumgunniol' but also his daughter Elizabeth who tells of a case of ghostly possession in 'The Harpsichord' which is a fairly told but lacks the invention of her father's work.

Closing the book are two authors who are anthology stalwarts, W.W. Jacobs, who is represented by a story I hadn't read before,'The Three Sisters' which reminded me entirely of 'The Tell-Tale Heart' and finally Joan Aiken's 'Sonata for Harp and Bicycle' allows the book to end on a romantic high even if it's a long way from being one of her best.

Some interesting stories make this a good but not essential anthology unless of course you're a newcomer to the delights of the genre then it's probably one to keep an eye out for.
Posted by ian holloway at 21:45 No comments:

The Dark is Rising 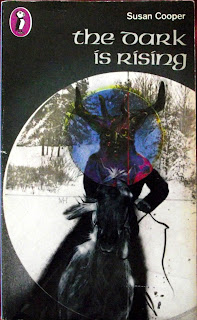 "When the Dark comes rising, six shall turn it back, three from the circle, three from the track; wood, bronze, iron; water, fire, stone; five will return, and one go alone.”
With these mysterious words, Will Stanton discovers on his 11th birthday that he is no mere boy. He is the Sign-Seeker, last of the immortal Old Ones, destined to battle the powers of evil that trouble the land. His task is monumental: he must find and guard the six great Signs of the Light, which, when joined, will create a force strong enough to match and perhaps overcome that of the Dark. Embarking on this endeavour is dangerous as well as deeply rewarding; Will must work within a continuum of time and space much broader than he ever imagined.

Book two of Cooper's series of the same name takes a slightly different tack to the first.  What we see here is a far more developed and cohesive storyworld than in the first. The Blyton-esque overtones are much less obvious and the story has considerably more depth.

The core idea here seems much the same - there is an eternal battle between good and evil / the Light versus the Dark - and the old fella putting the kids at risk in the first is back recruiting yet another wee fella to the cause.  This particular tiddler though is a bit special as he's the last 'Old One', one of the protectors of the world, heir to their power and magic and the chosen one who will find and unite the six signs that will herald the victory of the light.

Cooper has created a whole mythology for these 'Old Ones' tying them into human events throughout history and incorporating folktales such as 'Wayland Smith' and 'The Wild Hunt' which in many ways means the back story is more well developed than the book story which again is a little too pat.  The 6 signs almost literally fall into young Will's lap and by the halfway point it's apparent that - whilst obviously - he's going to succeed in his endeavours he's also going to do so without any great expenditure of effort.  It's an unfortunate flaw as in all other ways this is a most enjoyable read filled to bursting with invention that left me intrigued to see where she is going to take her story next but also with the knowledge that the story may be a little too pat.

Buy it here -  The Dark Is Rising: Modern Classic

Posted by ian holloway at 13:22 No comments: 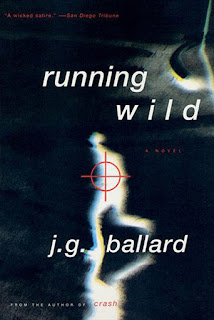 The thirty-two adult members of an exclusive residential community in West London are brutally murdered, and their children are abducted, leaving no trace. Through the forensic diary of Dr. Richard Greville, Deputy Psychiatric Adviser to the London Metropolitan Police, the brutal details of the massacre that has baffled the entire police department unfold.

I've only ever tried to dig into one other Ballard story before, an audiobook of The Drowned World which really didn't grab me.  I'm a creature of fickle whims as far as books are concerned, if the mood's not right it goes back on the shelf and the mood wasn't right.  I recently stumbled on this little novella in a charity shop and the mood was definitely right. 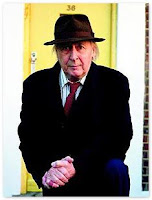 The story tells of the investigation of a mass murder at an ultra modern housing estate and the apparent kidnapping of all the children.  The story unfolds through the report of investigating psychiatrist, Richard Greville, who has been brought in to help think around the problem. Unfortunately it's not a problem that needs a lot of thinking around and you'll have probably worked the problem out within the first couple of pages.  It's then a matter of waiting for him to catch up.

So, with the whodunnit aspect in the toilet, this is a polemic, a castigation of the nanny state, a rebuttal against the eye of Big Brother and a prediction of the lengths people will go to to be free of tyranny and truthfully it's better that way.

Posted by ian holloway at 10:57 No comments:

Burnt Offerings: The Cult of the Wicker Man 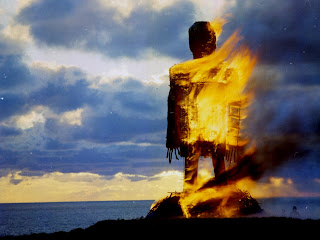 It's hard to imagine there are many people reading this who are not, at the very least, familiar with the cinematic glory that is The Wicker Man.  For me it was the film that, thanks to a screening as part of the 'Moviedrome' series, brought the teenage me back to my first love of British horror after having strayed into the hyperactive, technicolour splatters of the US varieties.  It's a film I've watched more times than I care to imagine.  I spent much of the late 80s and well into the nineties evangelising it to anyone who would listen and oh the days of joy when the Directors Cut DVD arrived or when Trunk Records released the soundtrack.

It's been a few years now since I sat down for a rewatch and I think I'd like to wait a little longer yet until the craving becomes too strong to ignore. In the meantime I was hunting out some behind the scenes stuff and came across this Mark Kermode documentary from the 2013 'Final Cut' Blu-ray that features contributions from the key participants many of whom have since left us.  It's an interesting watch and well worth an hour of your time.

If you wish to get your own copy of the film and support both it's creators and Wyrd Britain then we'd love it if you'd buy it using this link - Wicker Man - 3-Disc 40th Anniversary Edition [Blu-ray]
Posted by ian holloway at 18:27 No comments: