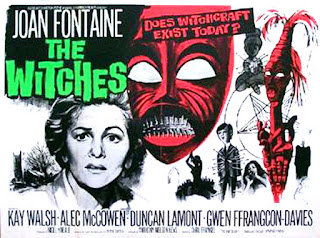 Whilst Nigel Kneale will always, thanks to the success of Quatermass, be most strongly remembered for his science fiction stories throughout his career he would regularly return to stories of a more supernatural bent where he could explore the intersection between the rational and the supernatural such as the brilliant 'Murrain', in episodes of his TV series 'Beasts' such as 'Baby' and, in 1966 for Hammer Studios, in 'The Witches' his adaptation of Norah Loft's novel 'The Devil's Own'.

Recovering from a breakdown following a traumatic incident with an annoyed witch doctor in Africa, Gwen Mayfield (Joan Fontaine) takes a job as headmistress at a small school in the village of Heddaby. There she encounters local bigwigs, writer Stephanie Bax (Kay Walsh) and her brother Alan (Alex McCowen) who has a penchant for dressing as a vicar because "...it gives me a sense of security." 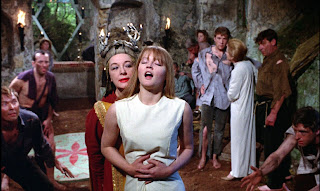 On the surface Heddaby seems idyllic if a little on the insular side but the discovery of a headless, pin stuck doll and the sudden illness of her star pupil Ronnie (a teenaged Martin Stephens - 'The Innocents' (UK / US) & 'Village of the Damned' (UK / US)) brings her to the conclusion that there's a witch at work in village potentially in the form of the sadistic cat whispering and grand-daughter mangling Granny Rigg (Gwen Ffrangcon-Davies).

Intended as a vehicle for reinvigorating Fontaine's flagging film career the movie's poor reception instead marked its end and it's not particularly surprising as despite having had a fairly glittering and Oscar winning career (for Alfred Hitchcock's 'Suspicion') she's a personable but largely ineffective lead here overshadowed by Walsh and most everyone else. 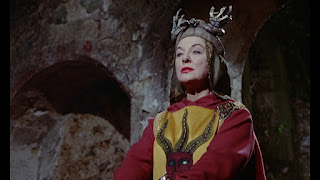 For most of the movie director Cyril Frankel manages a convincing air of escalating unease but following a dramatic scene shift midway through the movie which could have and should have marked the beginning of the climax it all seems to somehow get away from him and the movie culminates in what is essentially an extended dance routine.  There are shades here of 'Night of the Eagle' and it uses much of the now familiar 'folk horror' template but 'The Witches' is little more than a flawed curio but entertaining in its own idiosyncratic way.

If you enjoy what we do here on Wyrd Britain and would like to help us continue then we would very much welcome a donation towards keeping the blog going - paypal.me/wyrdbritain
Affiliate links are provided for your convenience and to help mitigate running costs.
Posted by ian holloway at 11:08