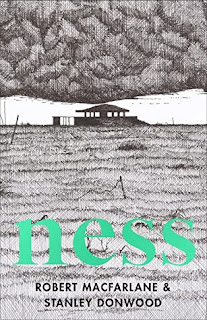 Somewhere on a salt-and-shingle island, inside a ruined concrete structure known as The Green Chapel, a figure called The Armourer is leading a black mass with terrible intent.
But something is coming to stop him.
Five more-than-human forms are traversing land, sea and time towards The Green Chapel, moving to the point where they will converge and become Ness. Ness has lichen skin and willow-bones. Ness is made of tidal drift, green moss and deep time. Ness has hagstones for eyes and speaks only in birds. And Ness has come to take this island back.

Nature writer Macfarlane and artist Donwood have collaborated once before on 'Holloway', a search for hidden track ways and coincidentally the only other one of Macfarlane's books that I've read having been given it as a gift a few years back.  This time though the author steps away from the real into the realm of fiction with an apocalyptic prose poem based around the Orford Ness in Suffolk.

The Ness, now owned by the National Trust, was previously a military development site and testing ground for nuclear and chemical stupidities which, though now abandoned, still wears the scars of its previous inhabitants.

Macfarlane's prose poem finds echoes of these brutal inhabitants and confronts them with the spirit of the Ness itself as its various aspects reclaim the land in a story about the impermanence of man and the permanence of nature and the natural's inevitable victory over the un.

It's a quick and interesting read but not for me a wholly satisfying one. I am at heart a fairly simple soul and as much as I enjoy a beautifully constructed sentence, an engaging turn of phrase and a grand concept I also love a story and whilst Ness satisfies the first three requirements with aplomb the last one not so much and so I closed it with the slightly disappointed feeling that something was missing.  It's pretty much the same issue I have with poetry in general and not just the prose version as seen here but I'd like to stress that this is my very own personal foible and beyond that Ness makes for intriguing reading.
Buy it here - UK

If you enjoy what we do here on Wyrd Britain and would like to help us continue then we would very much welcome a donation towards keeping the blog going - paypal.me/wyrdbritain
Affiliate links are provided for your convenience and to help mitigate running costs.
Posted by ian holloway at 17:59