Weird Woods: Tales from the Haunted Forests of Britain 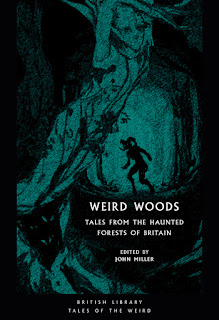 John Mller (ed)
British Library
Woods play an important and recurring role in horror, fantasy, the gothic and the weird. They are places in which strange things happen, where you often can’t see where you are or what is around you. Supernatural creatures thrive in the thickets. Trees reach into underworlds of earth, myth and magic. Forests are full of ghosts.

In this new collection, immerse yourself in the whispering voices between the branches in Wistman’s Wood on Dartmoor, witness an inexplicable death in Yorkshire’s Strid Wood and prepare yourself for an encounter with malignant pagan powers in the dark of the New Forest. This edition also includes notes on the real locations and folklore which inspired these deliciously sinister stories.

It's been a while since I picked up any of these British Library Tales of the Weird books but the've continued to release some very intriguing collections and I've grabbed three recently which have caught my eye.  This one, with my fondness for arboreal shenanigans, was always gong to be a must buy and indeed proved to be a solid collection of, mostly, entertaining tales of the deep dark woods.

It doesn't get off to a particularly auspicious start with the anonymous opener, 'Whisperer in the Woods', lifted from the pages of Charles Dickens' literary journal ' All Year Round'.  It's a poorly written and fairly common or garden sort of story of wronged widows and plucky sons and help from beyond and I'm not entirely convinced by the weird woodiness of Edith Nesbit's 'Man Sized in Marble' but a story as good as this always merits a reread especially on a cold wet winter's night.

Gertrude Atherton's 'The Striding Place' puts a gentleman pining and - sort of - searching for his lost friend into a battle with the elemental force of a raging river that runs through the woods in a story with a distinct but typically circuitous homosexual undertones and a sudden and jarring ending worthy of Robert Aickman.  Another classic tale with distinct homoerotic undertones comes next in the form of E.F. Benson's 'The Man Who Went Too Far' another story I'm always happy to reread.

We have a slght dip with the next two stories as neither W.H. Hudson's 'An Old Thorn' nor Elliott O'Donnell's 'The White Lady' have much to recommend although the former conjures up an interesting initial vibe before losing it's way and petering out.

We are on much more solid ground with Algernon Blackwood's 'Ancient Lights' as the venerable master spins a yarn concerning a fairy wood that reads like a forebear of Robert Holdstock's 'Mythago Wood' books.

We've and interesting and haunting proto-feminist tale of a man's selfish desire and a young woman's love of her home in Mary Webb's 'The Name Tree' whilst in Walter de la Mare's 'The Tree' a pompous and vulgar fruit merchant travels to visit his estranged artist brother who lives and works in the shadow of an exotic tree that is his inspiration.

Marjorie Bowen's 'He Made a Woman...' is a quick and beguiling riff on the story of Blodeuwedd taken from the Mabinogion and also the inspiration for Alan Garner's 'The Owl Service'.  This is followed by one of M.R. James' later and lesser tales, 'A Neighbour's Landmark', which, with it's inocuous story of a haunted wood, is lacking some of the panache of his clasic tales.

The book ends oddly with 'N' the last great flowering of Arthur Machen's genius.  Certainly there's a weird wood in there as this is one of the elder statesman of the weird's stories of the thin places but it feels out of place here and far more at home in the London collection the The British Library have published at the same time.  I rarely turn down the opportunity to reread Machen though and this is a sublime end to an enjoyable collection.

Affiliate links are provided for your convenience and to help mitigate running costs.
Posted by ian holloway at 15:44