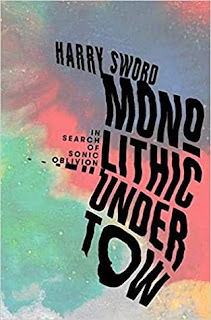 Harry Sword
White RabbitMonolithic Undertow alights a crooked path across musical, religious, and subcultural frontiers, exploring a concept that is often described as 'the drone'. Harry Sword traces the line from neolithic Indo-European traditions to the modern underground by way of mid-20th Century New York, navigating a beguiling topography of archeoacoustics, ringing feedback, chest plate sub bass, avant-garde eccentricity, and fervent spiritualism. From ancient beginnings to bawdy medieval troubadours, Sufi mystics to Indian raga masters, North Mississippi bluesmen to cone-shattering South London dub reggae sound systems, Hawkwind's Ladbroke Grove to the outer reaches of Faust, Ash Ra Temple and sonic architects like La Monte Young, Brian Eno, and John Cale. the opium-fueled fug of The Theatre of Eternal Music to the caveman doom of Saint Vitus. the cough syrup reverse hardcore of Swans to the seedy VHS hinterland of Electric Wizard, ritual amp worship of Earth and Sunn O))) and the many touch points in between, Monolithic Undertow probes the power of the drone: something capable of affording womb-like warmth or evoking cavernous dread alike. This story does not start in the twentieth century underground: the monolithic undertow has bewitched us for millennia. The book takes the drone not as codified genre but as an audio carrier vessel deployed for purposes of ritual, personal catharsis, or sensory obliteration, revealing also a naturally occurring auditory phenomenon spanning continents and manifesting in fascinatingly unexpected places. Monolithic Undertow will be a book about music and the very human need for transcendence and intoxication through sound. It seeks to reveal the drone as a tool of personal liberation that exists far outside the brittle confines of commodity culture.

I'm quite torn by this book.  On the one hand it's an interesting overview of many of the prime movers in early drone music history but on the other it's a fairly repetitive mish mash of  scattershot snapshots of a - perhaps too - wide swathe of musicians many of whom have a fairly tenuous link to what can be thought of as drone music.  Either way, it's a tad too long and kind of runs out of things to say a little way before the end.

On the subject of choice of artists Sword obviously makes a case for his choices but I remain unconvinced that in this context the doom metal grind of Electric Wizard deserves three times the coverage of Pauline Oliveros or that the Stooges' contribution to the drone or Steve Albini's who both feature are of more consequence than say Zoviet France or Monos (or indeed any of the North East England scene) or Stars of the Lid or Merzbow none of whom feature or even Tangerine Dream who are pretty much passed over.

I think though my biggest issue with the book is a result of its structure.  Exploring things in a mostly chronological order it does get quite repetitive quite quickly.  I think a case can be made for a more engaging and deeper analysis by looking for commonalities and presenting the work as an exploration of the various aspects of the form - search for transcendence, compositional colour, ambience, space, etc - and show how various folks have approached these rather than he did then she did then they did then...

Like I said though I'm torn.  I'm sure that what I've written so far is going to seem like I got nothing out of the book but that's definitely not the case.  As a primer on the use of the drone it's an interesting read.  For someone like me who has been a devotee of the form for more years than I care to admit it has it's frustrations but if it's an aspect of music that you are keen to be introduced to then this will certainly set you on some interesting paths but what we have here isn't a book about drone music but a book about music with drones in and for me at least that's an important distinction.

Affiliate links are provided for your convenience and to help mitigate running costs.
Posted by ian holloway at 15:44