The Day The Earth Caught Fire 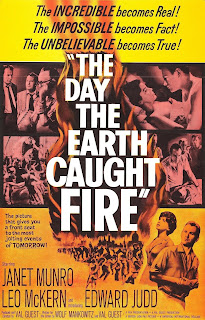 After an early career making light comedies director Val Guest took an unexpected sidestep in 1955 when he was tasked by Hammer with directing the movie version of the first Quatermass story, 'The Quatermass Xperiment'.  Following it's success he developed a successful sideline in science fiction with the second Quatermass movie and 'The Abominable Snowman' (both 1957) and, in 1961, thanks in part to his profits from Cliff Richard's 'Expresso Bongo', he got the go ahead from British Lions too make the apocalyptic 'The Day The Earth Caught Fire'.

Simultaneous American and Russian nuclear tests knocks the Earth off it's axis and out of it's orbit sending it moving towards the sun.  Daily Express journalists Peter Stemming (Edward Judd - 'Island of Terror' & 'Vault of Horror') and Bill Maguire (Leo McKern - The Prisoner's two time No.2) along with government typist and whistleblower Jeannie Craig (Janet Munro - 'The Trollenberg Terror') break the story and cover the aftermath as society crumbles and the world waits for salvation or death. 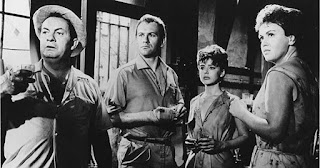 It's a gloriously mature science fiction film, there are no dashing square jawed heroes - Judd's Stemming is a bitter and broken man careering towards alcoholism - just people struggling and adapting to tumultuous times both before - the dawn of the 1960s - and after the Earth is made to go walkabout.  Guest has made primarily a newspaper movie along with many of the tropes that entails but placed it in the context of an encroaching global apocalypse. He's coloured his movie with some wonderfully hard-bitten and barbed dialogue and made good use of stock footage of fires and storms that roots the film firmly in the real.

The version presented below is the US version with bells added to the end which does spoil the deadpan ambiguity of Guest's original edit a little.

If you enjoy what we do here on Wyrd Britain and would like to help us continue then we would very much welcome a donation towards keeping the blog going - paypal.me/wyrdbritain
Affiliate links are provided for your convenience and to help mitigate running costs.
Posted by ian holloway at 13:26