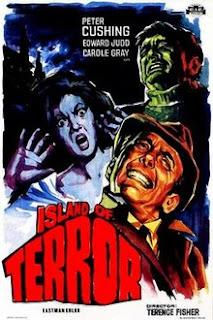 ), 'The Curse of Frankenstein' (UK

)) - and principal cast - Peter Cushing.
In this instance the strange creatures - named 'Silicates' - are created in a lab on the island where they are trying to cure cancer.  The Silicates are greenish blob things with Triffids like stingers that feed on the the bones of their victims.  Impervious to axes, petrol bombs and dynamite it's up to the trio of doctors - Cushing, Edward Judd ('First Men in the Moon' (UK

)) & Eddie Byrne - along with scream queen Carole Gray ('Devils of Darkness') to find a way to end their threat and save the islanders.
It's a fun movie that I've always thought has the feel of early 70s Doctor Who about it and with it's perils of science storyline it's certainly coming from the same place that would later give us Doomwatch.  There are some pacing issues but Fisher gives us a real tour of the island with various outdoor locations and a plethora of studio sets.  His slow reveal of the monsters is as effective as the creatures aren't and the finale as the panicked villagers are held seige in the village hall is very well done.
Buy it here - UK

If you enjoy what we do here on Wyrd Britain and would like to help us continue then we would very much welcome a donation towards keeping the blog going - paypal.me/wyrdbritain
Affiliate links are provided for your convenience and to help mitigate running costs.
Posted by ian holloway at 11:13