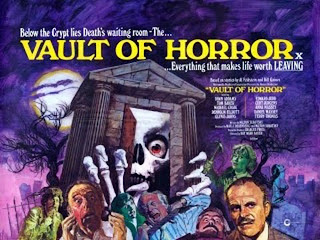 Directed by the great Roy Ward Baker (Quatermass and the Pit (1967) The Vampire Lovers (UK /  US) and The Monster Club (UK) and numerous episodes of ITV and ITC spy-fi serials including The Avengers, The Saint and The Champions), Vault of Horror was the sixth of the seven portmanteau horror films made by Amicus Productions.  It consists of five stories wrapped in a framing story of five men in an elevator finding themselves trapped in a clean and well lit basement that handily has five chairs and a ready supply of booze.  In the great tradition of these sort of things each man then  tells a story, in this case of a recurring dream. 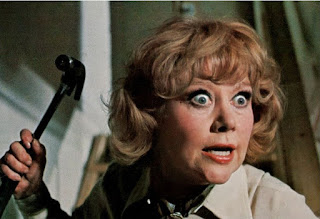 Unlike other portmanteaus that often featured at least one comedic story in order to lighten the mood, this one's the other way round with 4 of the 5 stories in 'Vault of Horror' being very much played for dark laughs in the estimable EC Comics tradition.  From the lamentable fangs of the bourgeois patrons of the vampire restaurant in 'Midnight Mess' via a fabulous slapstick performance by Glynis Johns as the bullied wife of obsessive neat freak Terry-Thomas in 'The Neat Job' to venerable actor Curt Jurgens wrestling with a rope in 'This Trick’ll Kill You' and Robin Nedwell and Geoffrey Davies riffing on their characters from the hugely successful 'Doctor...' comedies in 'Bargain in Death'.  The final story, 'Drawn and Quartered', featuring a magnificantly hirsute Tom Baker - soon to be de-bearded and be-scarfed in the role we all know him for - is the exception to the frivolity in a voodoo tale of artistic revenge. 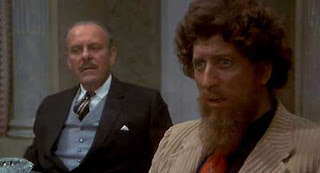 In a slightly odd twist 'Vault of Horror' takes most of it's stories, from the pages of 'Tales from the Crypt' comic book rather than from the one whose name it bears and whilst being eminently watchable and featuring some good performances from some fine actors it is a rather slight and disposable sort of thing which isn't really meant to be an insult.  When I'm in the right sort of mood this is one of my go to movies as for the expenditure of very little effort it provides plenty of smiles.

If you enjoy what we do here on Wyrd Britain and would like to help us continue then we would very much appreciate a donation towards keeping the blog going - paypal.me/wyrdbritain
Posted by ian holloway at 12:00