For '3 Wyrd Things' I asked various creative types whose work I admire to tell us about three oddly, wonderfully, weirdly British things that have been an influence on them and their work - a book or author, a film or TV show and a song, album or musician. 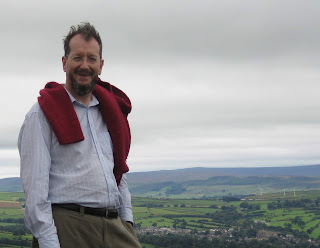 Mark Valentine is an English author, biographer and editor whose stories have been published by a number of small presses and in anthologies since the 1980s.
Valentine has published a biography of Arthur Machen (Seren Press), a study of Sarban, 'Time, A Falconer' (Tartarus Press), several books of essays on lesser known authors, groups and landscapes (also Tartarus Press) - the most recent of which, 'A Country Still All Mystery', has just become available again - a book of poetry, 'Star Kites' and a number of collections of short fictions including his (and John Howard's) wonderful series of occult detective stories, 'The Collected Connoisseur'. He has also written numerous articles for the Book and Magazine Collector magazine, and introductions for various books, including editions of work by Walter de la Mare, Robert Louis Stevenson, Saki, J. Meade Falkner and others.
Valentine also edits Wormwood (Tartarus Press), a journal dedicated to fantastic, supernatural and decadent literature, and has also edited anthologies, including 'The Werewolf Pack' (Wordsworth, 2008) and 'The Black Veil' (Wordsworth, 2008).

You can read more of Mark's writing at the shared Wormwoodiana blog.

We love Mark's work here at Wyrd Britain and we are hugely honoured to feature his selection for this month's '3 Wyrd Things'. 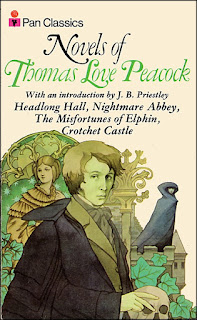 )
There was a Pan paperback with a cover depicting a solemn young cloaked gentleman fingering a skull while ivy wreathed around him. And it contained not only Headlong Hall and Nightmare Abbey (two titles alone enough to allure anyone with an interest in ghost stories and the Gothic) but also The Misfortunes of Elphin, a romance of Welsh folk stories. Peacock’s books from the early 19th century involved assembling a party of eccentrics at some remote country house, where they drink, dine, debate and sing, and in the end are rather perfunctorily married off, or otherwise confirmed in their heart’s desires. In between time they have odd adventures and expound even odder notions. They include Mr Escot, the deteriorationist, who thinks the world is getting worse, and Mr Foster, the perfectibilian, who thinks the reverse. Their lively arguments do not affect their cordiality to each other.

I had been recommended Peacock’s work at age 16 by a highly prescient English teacher, the poet Donald Atkinson, who thought I would like them, even though they weren’t on the syllabus. I was astounded to find that old books could be so enjoyable. “Mr Milestone wielded the poker with a degree of dexterity which induced the rest of the party to leave him in sole possession of a considerable circumference” was one of the choice phrases I at once admired, both for its madcap slapstick and its mock-orotundity. When, some many years later, an astute observer suggested to me that most of my stories were about friendship (something I had simply not noticed), I knew where that must have begun: with these companionable, affable, epicurean and eccentric books. 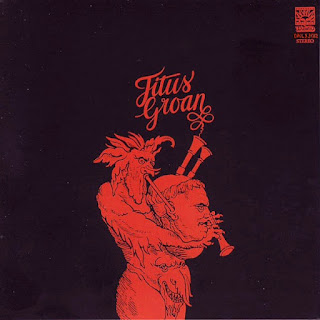 )
At the bottom of Bridge Street, Northampton, in the late 1970s and early 1980s, was Memory Lane, a shabby second-hand record shop which always stank of stale tobacco, but had racks and racks of obscure discs, all very cheap. Here I found (for just 25p each) unknown ska singles imported from the Caribbean, with labels of mustard yellow and terracotta red, including the poignant trombone-led instrumental, ‘Lonely Man’ by Ronald Wilson, with its yearning melody and under-stated melancholy. Here too was the peculiar ‘Dance of the Psychedelic Lounge Lizards’ by The Neutrons, who turned out to be mostly the Welsh band Man. A Dawn sampler album introduced me to Comus, with their goatly bleating vocals and wildwood flute: and a similar selection from John Peel’s Dandelion label included Bridget St John’s magical, dreamy track ‘Fly High’. Both of these acts have, rather wonderfully, reappeared in recent times. But, most of all, I could hardly be expected to resist a gatefold sleeve in sombre black and burnt orange depicting a grotesque satyr playing the bagpipes through a head, and entitled Titus Groan. Particularly when there was the promise of a flute and a track over eleven minutes long entitled ‘Hall of Bright Carvings’, with another devoted to Titus Groan’s saturnine sister, Fuschia. Nor was I disappointed when I got it home and listened to the pounding rhythm, wailing flute and solemn vocals. “In the dusty high-vaulted halls / Bright carvings glow, but no-one sees them” – in a glimmer, I was in Castle Gormenghast. And this album is a sort of touchstone for all the obscure things I’ve found in dusty back street shops and have tried to write about in fervent notes. 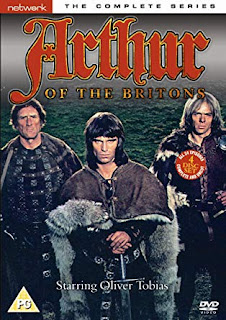 TV
Arthur of the Britons.
(Buy it here

)
The Arthurian mythos and the twilight centuries after the last of Roman Britain have always drawn me, and pervade quite a lot of my writing. It was pursuing this interest that led me to the work of Arthur Machen, Charles Williams, Mary Butts and other favourite authors. But if you look up the indexes of books of Dark Age history now, you will find that often Arthur is pointedly omitted. Most current academics decline to accept there is any real evidence for his existence. Others, while making use of the magic of his name and including it in their titles, mention him only to diminish or dismiss any such figure. This seems to me a swing of the pendulum too far: there is a certain amount of fragmentary evidence that ought to be more thoughtfully considered. And if indeed there was a British warlord and/or a legendary hero, whether from Cumbria, Wales or Cornwall, then he was probably not unlike the character depicted in HTV’s excellent 1972-3 series, starring Oliver Tobias in the title role. There was nothing of the anachronistic knights in armour of the French romances here, but a more authentic and credible figure whose adventures, while rooted in a thoughtful picture of Dark Age culture, were still sufficiently thrilling. This was a subtle and knowledgeable portrayal which stripped away the later courtly accretions while still keeping the glamour and mystery of the myths. It made that misty time live for me, and I remember it with affection and respect. Indeed, at the slightest provocation, I can and do still whistle the theme tune, both stirring and wistful.

If you enjoy what we do here on Wyrd Britain and would like to help us continue then we would very much appreciate a donation towards keeping the blog going - paypal.me/wyrdbritain
Posted by ian holloway at 16:57