Night of the Marionettes 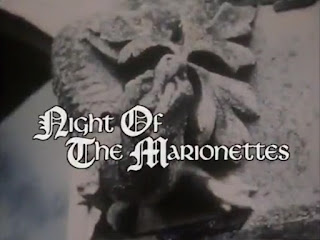 Created and mostly written by Robert Muller the 1977 BBC anthology series 'Supernatural' was an attempt to make a series of - even then - old fashioned gothic horror tales filled with vampires, werewolves and the like.  Each episode revolved around the telling of a scary tale by a prospective member of the 'Club of the Damned' who, if their tale proved sufficiently terrifying would be granted membership, if not then their lives would be forfeited.

'Night of the Marionettes' tells of a writer (Gordon Jackson - 'George Cowley' from 'The Professionals') obsessed by Lord Byron and the two Shelley's - Mary in particular - who, with his wife and daughter in tow,  takes lodging at a deserted Swiss hotel where he becomes convinced that the source of his obsession had lodged before him.  Indeed, it soon becomes clear that the exuberant marionette show performed by the innkeeper (Vladek Sheybal) and his family may have had quite the profound effect on the young Mary. 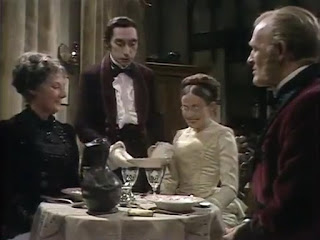 The end result is a flawed attempt at an interesting idea.  Sheybal gives his usual wonderfully alien performance but Jackson and Pauline Moran (most widely known as Poirot's 'Miss Lemon' and who also played the titular character in the Nigel Kneale adaptation of 'The Woman in Black') who plays his daughter - also called Mary - are both hamming it up something terrible and only seem comfortable in their roles when engaging in some incestuous flirting.  The old, wooden hotel is a great setting though and there's a wonderfully Hammer Horror graveyard visible through the window and in more capable hands this could have been a gothic classic rather than just an interesting flawed attempt at revitalising the genre.

If you enjoy what we do here on Wyrd Britain and would like to help us continue then we would very much appreciate a donation towards keeping the blog going - paypal.me/wyrdbritain
Posted by ian holloway at 12:38