Curse of the Crimson Altar 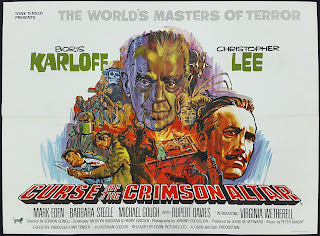 Investigating the disappearance of his brother, Peter, antiques dealer Robert Manning (Mark Eden) travels to Craxted Lodge in the town of Greymarsh Peter's last known whereabouts and coincidentally the town their family had previously called home back in ye olde days.  Upon arrival he makes the acquaintance of the master of the house Morley (Christopher Lee) and his niece Eve (Virginia Wetherell) - who has a seeming penchant for throwing bacchanalian parties before dinner has even been served - and learns of their ancestor Lavinia (a body-painted and horned headdress adorned Barbara Steele) who had been burned at the stake as a witch - no prizes for guessing whose family had lit the fire - and local historian Professor John Marsh (Boris Karloff) 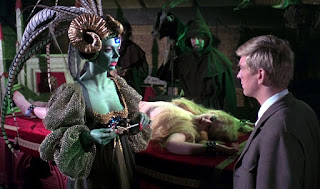 Lee is as effortlessly suave as ever but is essentially phoning in a part that he could play in his sleep and Eden, who had a long career including several roles in Wyrd Britain friendly TV shows but who is most well remembered in this country for his villainous stint in the soap opera Coronation Street (there's even a real world plaque marking the spot where his character died), just isn't lead material.  Steele has essentially nothing to do beyond wearing that amazing looking costume and a very frail Karloff, just a year on from his late career highlight in Michael Reeves' 'The Sorcerers') and in one of his final roles gives a typically solid performance and there's even a quick, amusing and surprisingly meta joke at his expense. 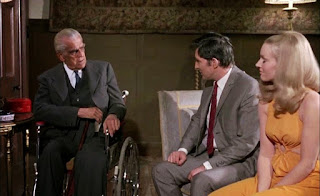 Made by Tigon British Film Productions ('The Blood on Satan's Claw' & 'Witchfinder General'), directed by Vernon Sewell ('The Blood Beast Terror') from a script by Doctor Who alumni Mervyn Haisman and Henry Lincoln ('The Abominable Snowmen', 'The Web of Fear' & 'The Dominators') based loosely on H.P. Lovercraft's 'The Dreams in the Witch House' it's always going to be an enticing prospect but the end result is all a little flat and disjointed and Sewell never quite manages to inject the movie with any zest but it does have its charms.

Affiliate links are provided for your convenience and to help mitigate running costs.
Posted by ian holloway at 12:45