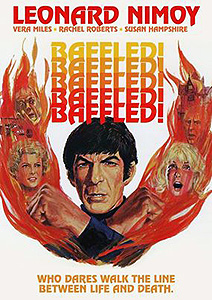 After leaving the cast of 'Mission Impossible' Leonard Nimoy spent several years racking up various special guest appearences along with a starring role in this pilot episode for a never made occult detective series from ITC, the home of such shows as The Saint, The Champions, The Prisoner, Captain Scarlet and the Mysterons, Space 1999 and many more.
Nimoy plays racing car driver Tom Kovack who starts experiencing visions of death at an English country house.  Teaming up with rare book dealer and amateur occultist Michelle Brent (Susan Hampshire) they head to the clifftop house on the English coast where they find American actress Andrea Glenn (Vera Miles) and her daughter Jennifer (Jewel Blanch) caught up in an elaborate(ish), occult(ish) ,Agatha Christie(ish) scheme. 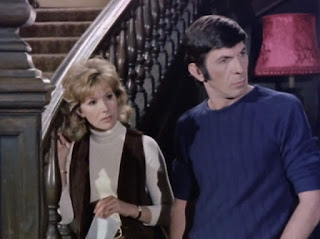 Truthfully it's no surprise it didn't go to series as it's just not great and it has a terrible name.  There's some nice chemistry between the two leads with Hampshire effortlessly affable in her role, Nimoy as cool as ever but he was always better when acting without emotions and there's a solid Wyrd Britain cast around them including Ray Brooks (the voice of 'Mr Benn'), Christopher Benjamin ('Henry Gordon Jago' in 'The Talons of Weng-Chiang' and various Big Finish spin offs) and Milton Johns ('The Invasion of Time').  It's far too long though and despite obviously having a moderately healthy budget, some fun dialogue and a good bratty performance from Blanch it never really gets going but if - like me - you've a love of an occult detective romp and you've ever wanted to see Spock wrestling an old lady then this is for you.

If you enjoy what we do here on Wyrd Britain and would like to help us continue then we would very much welcome a donation towards keeping the blog going - paypal.me/wyrdbritain
Affiliate links are provided for your convenience and to help mitigate running costs.
Posted by ian holloway at 13:03