The Feast of Bacchus 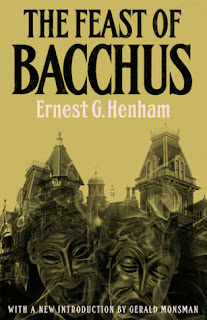 Ernest G. Henham
Valancourt BooksIn the remote hamlet of Thorlund stands the manor house known as the Strath, an eerie place that exercises a mysterious hold over anyone who enters it. The site of tragedy in 1742 when its owner, Sir John Hooper, turned highwayman and met his death on the gallows, the Strath has remained vacant for over a century, a pair of hideous masks its only occupants. When the novel opens, the Strath’s new owner has just arrived from America to take possession of the house, but he is soon found horribly murdered. Now the next heir, young Charles Conway, has come to the Strath, and the house begins to work its baneful influence on him and on the local residents, causing them to behave in bizarre and violent ways. What is the connection between the sinister power of the Strath and the ghastly masks that adorn the wall? And once Conway and the others are drawn within the evil place, can any of them possibly survive?

'The Feast of Bacchus' is another of Valancourt Books' series of reprints of neglected and forgotten gems of supernatural fiction from the Edwardian and interwar eras and another fascinating read.

Ernest George Henham was an English writer who wrote prolifically under his own name and as 'John Trevena'.  Published in 1907 'The Feast of Bacchus' tells a haunted house story of 'The Strath' a manor house with a chequered history in the remote village of Thorlund.  The house has lain abandoned for some 160 years behind it's gates and amidst a garden grown wild, it's only visitor the neighbouring rector who walks in its garden and under its influence  translates the classic poetry of Sappho and Alcman.  Into this idyll comes the brash American Henry Reed, the owner of the house, with his foolhardy plans for the place that soon lead to his demise.

Inside the house reside two masks, comedy and tragedy, and when Reed's heir Charles Conway arrives it's their growing influence that controls the actions of himself, his visitors and the neighbours as events unfold in line with the structure of a Greek play.

It's a fabulously strange read that held me rapt throughout as Henham takes his cast of characters apart piece by piece and remakes them in various forms - often in line with his own quite conservative worldview.  They are all though very likeable in their ways and even those with less than pleasant character traits are never portrayed as cartoonish with their fripperies and their profligacies shown to be only part of a larger personality perhaps yet to emerge.

The final resolution is obvious but correct and brings to a close a wild and weird ride.  It's an exhale after the breathless and relentless build as The Strath's hold tightens and the sense of release one feels at the end is palpable and one is left to marvel at the beauty and power of Henham's creation.

Affiliate links are provided for your convenience and to help mitigate running costs.
Posted by ian holloway at 20:39