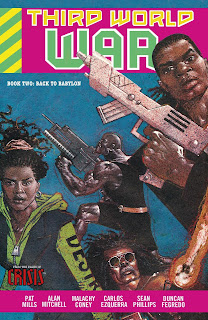 The second thrilling Treasury of British Comics collection of the politically charged thriller by Pat Mills and Carlos Ezquerra.
After her eye-opening experiences of corporate interference in Central America, Eve returns to Britain with a renewed political drive and determination to fight for what she believes in.
Written in the late 80s by Pat Mills (Nemesis the Warlock, Slaine) this incendiary second volume of the ground-breaking political comic not only contains contributions by legend Carlos Ezquerra (Judge Dredd, Preacher) but also introduces international comics stars Sean Phillips (Criminal, Kill or Be Killed) and Duncan Fegredo (Hellboy, Kid Eternity).

In this second volume of Third World War the focus moves from South America to the UK as Eve, Paul and the rest (who don't really feature all that much) return home on leave to a country in pieces where the wealth gap is unbreachable and civil liberties have ceased to be a thing. 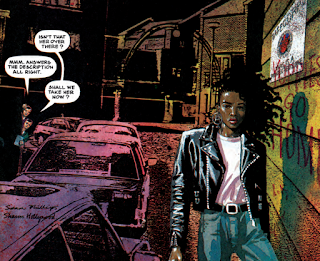 '3WW' was set in a Thatcherite wet dream version of now that always seemed horribly plausible although in this case one that has been mixed with a gang culture worthy of inclusion in 'The Warriors'.

Paul, or the 'eco-terrorist' Finn as he was revealed to be in the previous volume is off doing his thing for most of the book whilst Eve becomes increasingly involved with the Black African Defence Squad (BADS) who have liberated, renamed and occupied a walled off Brixton.  It's here that the focus of the book lies with Mills riffing on colonialism and racism - both political and casual - and on the experiences of black people in the UK and under UK jurisdiction whilst - almost - never forgetting that he's writing a dystopian sci fi comic. 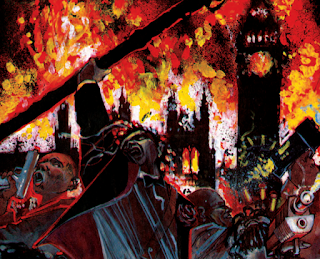 Mills was at the top of his game when he wrote this series producing it alongside work such as the iconic Slaine: The Horned God and Marshall Law whilst the much missed Carlos Ezquerra always produced the most sublime work.  Alongside these we have co-writer Alan Mitchell, recruited by Mills to provide an authentic voice to the work, and two artists who have become international names in their own rights but here produce work that is sympathetic to that of Ezquerra.

As is often the case - both with Mills and political work in general - it is a little heavy handed in places but equally with its focus on racism, green issues, food poverty, state surveillance and economic disparity it's still as depressingly relevant now as it was then and like all the best dystopian fiction it's terrifyingly apposite.

Affiliate links are provided for your convenience and to help mitigate running costs.
Posted by ian holloway at 17:50