The Master of the Macabre 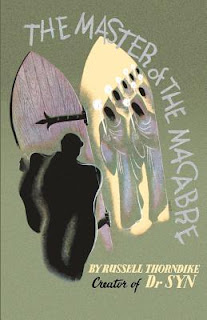 Tayler Kent flees London in a blinding snowstorm, hoping to escape the ghosts that haunt his home. Instead, he finds things may have gone from bad to worse when he crashes his car, breaks his ankle, and is forced to take refuge at a medieval monastery now inhabited by the eccentric Charles Hogarth, known as “The Master of the Macabre.” As Kent’s ankle heals, Hogarth entertains him with fine food, brandy, and a series of gruesome stories connected with an odd assortment of old relics on display in a curio cabinet. But the terrors are not confined to Hogarth’s tales: the monastery is haunted by the evil spirit of an apostate monk and besieged by more corporeal foes, who will stop at nothing to get their hands on one of the Master’s treasures. . . .
Best known for his series of novels featuring the smuggler Dr. Syn, Russell Thorndike (1885-1972) in The Master of the Macabre (1947) delivers an irresistible mix of horror, adventure, and black humour that is certain to please fans of classic ghost stories and supernatural fiction. This first-ever republication of the novel includes the original jacket art and a new introduction by Mark Valentine.

Russell Thorndike (1885 - 1972) was an actor and author of the popular 'Dr Syn' books, the tales of the swashbuckling pirate turned vicar turned smuggler, which he started writing before enlisting to serve in WWI where he was severely wounded at Gallipoli.

Written in 1946 'The Master of the Macabre' is Thorndike's entry into the occult detective genre.  All the usual tropes are present; an enigmatic lead relating stories of his escapades to an eager biographer / acolyte which in this case is the result of a series of possibly supernaturally influenced incidents, accidents and illnesses that leave author Tayler Kent collapsed with a broken ankle on the doorstep of Charles Hogarth, collector of macabre mysteries.

There are echoes of occult detectives past and Mark Valentine points out several of these in his introduction but for most of his tales Hogarth is an observer or chronicler rather than active participant.  Outside of these fireside tales (and in the manner to become so beloved of the portmanteau movies of the late 1960s and early 1970s) there's an overarching storyline that weaves itself around the stories which in this case involves ancient ghosts of a diabolical monk and a beautiful young woman and a troupe of murderous Muslim mountain men questing for a religious artefact they believe to be in Hogarth's possession.

Thorndike's writing is entertainingly melodramatic and the stories are enjoyably lurid.  There's a queasy colonialism inherent in the attitudes of the protagonists that makes for occasionally uncomfortable reading but equally often just as laughably absurd.

'The Master of the Macabre' is another in the line of Valancourt reissues of neglected and forgotten gems of supernatural fiction and as with the others I've written about in Wyrd Britain (and some I haven't because they don't fit with the blog's remit like Forrest Reid's fabulous 'The Spring Song' (UK / US)) a very enjoyable one.

Affiliate links are provided for your convenience and to help mitigate running costs.
Posted by ian holloway at 17:17