The Flesh and Blood Show 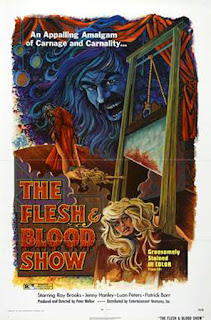 ) - 1972 sexploitation horror as a group of unfeasibly attractive young actors and actresses are hired to begin work on a new play at a ramshackle end of pier theatre where they begin to meet grisly but not particularly gory ends.

The cast of nearly knowns are led by Ray Brooks who will look familiar to some and sound familiar to many from his other job as the voice of Mr. Benn and Jenny Hanley who was proof positive that in the 1970s you could have parallel careers in horror and sexploitation movies - Scars of Dracula (UK

) - and as a children's television presenter - Magpie.  The rest of the cast features several more Hammer alumni, Luan Peters - Twins of Evil (UK

) - and Patrick Barr - The Satanic Rites of Dracula (UK

) - along with Robin Askwith and Candace Glendenning who had appeared together earlier that same year in another proto slasher, the vastly superior, Tower of Evil (UK

The Flesh and Blood Show was originally presented partly in 3D so if you have some 3D glasses hanging about then they'll come in very handy during the Shakespearean flashback scene late in the movie. 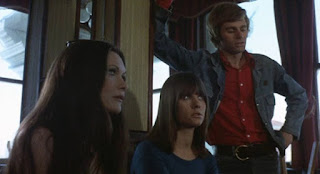 It is all a rather cheap and slapdash affair with a paper thin plot but the cast seem to be enjoying themselves although the director's constant need to get yet more bare breasts on the screen to the point that you almost expect one of the actresses to suddenly whip her top off during the credits is more exasperating than titillating.  It is very, very much of its time and in general feels more like the sex comedies that Askwith would become famous for - Confessions of an Axe Murderer maybe - than any of its contemporary horrors.  I quite like cheap and slapdash though and whilst this one is never, and I really do mean never, going to be hailed as a forgotten classic it does make for a fun watch.

Affiliate links are provided for your convenience and to help mitigate running costs.
Posted by ian holloway at 12:16

Email ThisBlogThis!Share to TwitterShare to FacebookShare to Pinterest
Labels: horror movie, The Flesh and Blood Show