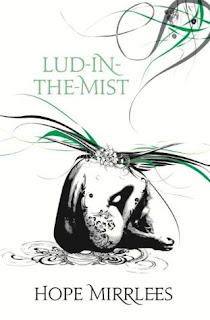 Lud-in-the-Mist - a prosperous country town situated where two rivers meet: the Dawl and the Dapple. The latter, which has its source in the land of Faerie, is a great trial to Lud, which had long rejected anything 'other', preferring to believe only in what is known, what is solid.
Nathaniel Chanticleer is a somewhat dreamy, slightly melancholy man, not one for making waves, who is deliberately ignoring a vital part of his own past; a secret he refuses even to acknowledge. But with the disappearance of his own daughter, and a long-overdue desire to protect his young son, he realises that something is changing in Lud - and something must be done.

I first read Lud-in -the-Mist about a decade ago having finally tracked down a copy after years of searching.  I'd first heard of it many years ago via Neil Gaiman but in those pre-internet days had started to think of it is an author's fiction; a dream book from Morpheus' library or a grand deception to send wannabe bibliophiles into a frenzy of futile furtling. And then I found one newly reprinted as part of the Gollancz Ultimate Fantasies sequence alongside more well known fantasy stallwarts suich as Conan, Elric and Lyonesse.

My first read all those years ago revealed to me that it was an intriguing but achingly slow read that I soon began to think of as Lud-in-the-Mud.  Truthfully though it just wasn't the right book for me at the time. I'm very much a whim reader and I follow my moods when choosing a book to read which often leads to me getting stuck in particular genres for a while. At that time I was reading lots of neo-noir, southern gothic and beat literature by folks like Charles Willeford, Barry Gifford, Harry Crews and Richard Brautigan so a delicate and very English fantasy about faeries written in 1926 proved a tad slow. 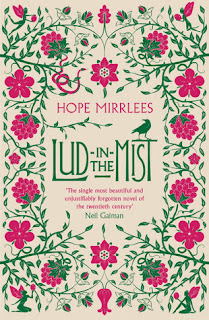 Lud-in-the-Mist, the principal town of the state of Dorimare, is a merchant town situated at the confluence of the rivers Dapple and Dawl and it is the former of these that lies at the heart of Lud's problems as it rises in the land of Faerie far to the west and it brings the madness of the fruits of that land.

The story sends the mayor of Lud on a journey across Dorimare and beyond in his search for answers to the misfortunes that have beset him and along the way, as is to be expected, he learns new truths and new values.

The book is a gentle read that finds it's conflict in the contrasts of the stolid and unimaginative middle class of the town and the wild, carefree, lawlessness of the faeries with Mirrlees laying her sympathies right in the middle and so the story becomes one of finding a way of life that embraces both law and anarchy, industry and art.

And one of my first impressions was right, the book is slow but that's definitely to its advantage.  It's a gentle river along which one can float whilst sampling it's bounty of fairy fruit.

If you enjoy what we do here on Wyrd Britain and would like to help us continue then we would very much welcome a donation towards keeping the blog going - paypal.me/wyrdbritain
Affiliate links are provided for your convenience and to help mitigate running costs.
Posted by ian holloway at 18:49