Man In A Black Hat 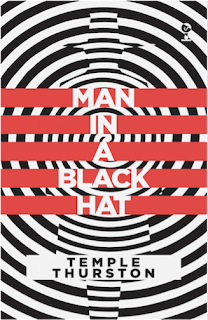 This strange novel opens at a country estate sale, where after a round of intense bidding, Mr Crawshay-Martin wins the auction for a 16th-century manuscript containing the occult secrets of the order of the Rosicrucians. But he does not get to enjoy his purchase long: the following morning, he is found dead inside his locked room, his throat slashed and the book missing. The police write the case off as a suicide, but Crawshay-Martin's friend Dr Hawke isn't so sure. He suspects the mysterious Gollancz, whose face, partly concealed beneath a black sombrero hat, does not seem to have aged a day in thirty years. Who is Gollancz, and what terrible powers of life and death does he possess? Temple Thurston's weird story will keep readers guessing until the final confrontation between the doctor and the Man in a Black Hat.

Originally published is 1930 this is part of a reissue project undertaken by Valancourt of forgotten and neglected gems of weird crime and thriller fiction.

E. Temple Thurston was an author, journalist, playwright and travel writer most well known at the time for his travel book about English canals, 'The Flower of Gloster' - and his play, 'The Wandering Jew' whilst this novel slipped into - undeserved - obscurity much like the author himself.

Falling under the umbrella term of 'metaphysical fiction' (recently explored in a pair of blog posts by Mark Valentine on his Wormwoodiana blog - part 1 & part 2) Thurston's tale of a Rosicrucian mystic and a locked room murder made for a fascinating read.  Sharing kinship with the likes of Charles Williams and David Lindsay it's a rumination on magic and the nature of reality if in fact the mystic in question, Gollancz, did indeed commit the murder whilst also somehow being many miles away.

The confusion and frustration our protagonist, Dr. Hawke, feels whilst trying to puzzle out the improbable how of things is contrasted by the cool certainty of his counterpart.  Perhaps unusually for a locked room mystery we are always in concert with the good Doctor that Gollancz is indeed guilty and we are swept along in the wake of Hawke's erratic ruminations and investigations.

The book - as is the case with a number of these reissues - contains an introduction by the aforementioned Mark Valentine (where I cribbed the background info from) who provides one of his characteristically informative author overviews as well as thoughts on the template for our villanous mystic.

A truly captivating, thoroughly enjoyable read that hopefully with this reissue will now be enjoyed by the wider audience it deserves.

Affiliate links are provided for your convenience and to help mitigate running costs.
Posted by ian holloway at 17:47