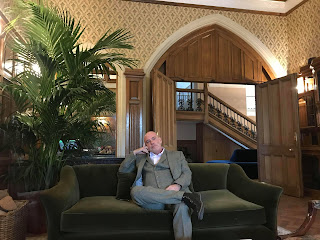 Andy is a musician, writer and multimedia artist and the driving force behind English Heretic, an autonomous creative research project. Pioneering the form of literary and aural aesthetics, he has released over a dozen albums and booklets.

On the 13th of this month Repeater Books are releasing 'The English Heretic Collection: Ritual Histories, Magickal Geography' a collection of his researches and rituals.  I was lucky enough to get a sneak peak at the book and I have to say if you have an interest in the outer edges of culture and the hidden branches of history then this book is for you - buy it here (UK

We are very pleased in advance of the publication of his book to be able to bring you Andy's selections for this month's 3 Wyrd Things. 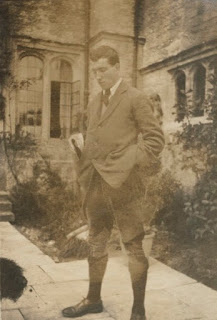 I've got an idiosyncratic take on the relationship between our 'wyrd' and the weird art it produces. I think 'wyrd' is the unique thread of our influences, which if we apply imaginally to creative output will allow access to a waking dream of personal mythology. That's the main gist of the last few years work as English Heretic A kind of surreal reworking in the countercultural midden of my adolescence.

Graves, isn't necessarily the biggest literary influence on me, more one that has unwound unexpectedly, a loose thread in the biographical tapestry, and also an influence inherited from my parents. As a family, we loved the BBC adaptation of Graves' I Claudius – I am pretty sure I didn't know it was by Graves or who Graves was at the time. That kind of obliviousness to future importance, I would say is a litmus test to the veracity of a wyrd influence. Graves wrote I, Claudius / Claudius The God using a form of 'poetic time travel' that he called the Analeptic Method. Similar in a way that you might do astral projection and then post-facto verify visions using Qabalah. Graves gives an example of this method in The White Goddess, where he attempts to decode the numerology of 666 to the emperor Nero. It's very eccentric, his whole approach to the mythology of poetry – but I am fascinated by the dream history of the occult that develops from this approach. On top of this all, the TV series also had a kind of joyful salaciousness. John Hurt around that time (playing Caligula) was incredibly ubiquitous too – from The Naked Civil Servant to Alien – and The Shout. I Claudius was initially panned for its unconvincing sets, fancy dress party togas and wonky toupees. But I think that's part of the magic, the luxurious ambition of Alma-Tadema, bathetically realised with MFI home furnishings. There's something of the camp operas of John Waters and George Kuchar here.

Jerzy Skolimowski's adaptation of Graves' short story “The Shout” left a powerful impression on me, as a teenager. The psychotic, itinerant charlatan, cuckolding the English marriage was a pure and frightening application of Graves' obsession with his single poetic theme – the battle between the poet and the wyrd for the muse. Not though as an engendered plot but more that this theme mirrors the solve-et-coagula in any creative journey. 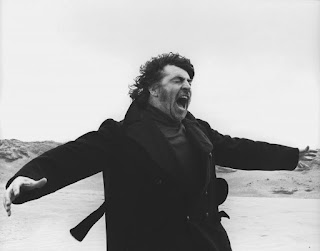 The Shout is told in flashback, by two inmates of an asylum, watching a cricket match within the grounds of the hospital. It's the perfect metaphor for the occult forces behind the polite rules of English life. I think it's significant that in JG Ballard's The Unlimited Dream Company – a similar intrusion of priapic shamanism to the village – the psychopathic hero Blake performs an Aboriginal mating act with the hole left by a cricket stump on his school playing field. I think both The Shout and Ballard's book are huge influences in my attempt to pollinate the country's geography and phoney tradition with a magically seeded satire – most definitely Satyre with a 'y'.

Graves' The White Goddess which I began to explore at the time I started English Heretic, has cut in to many projects almost despite myself. His chapter on “The Triple Muse” seems to exactly choreograph the scenes of ritual sacrifice in Blood on Satan's Claw. Here Graves' investigations into May-Eve tree cults are very compelling fictions of witchcraft. Robin Hood and Maid Marian become the lascivious black ram and seductive pucelle of a rebellious coven. Elsewhere, I've explored modern renditions of Graves' love chase. J.G. Ballard's Crash is pure Graves, only set along the causeways of West London. Vaughan, the psychopathic wyrd, is accurately described in Graves' words at the opening to Crash, appearing as a lean and dark spectral figure at the hospital bed of the protagonist Ballard. 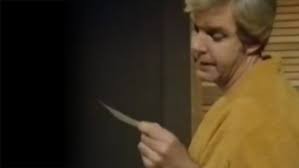 Television
Play For Today: A Photograph.

I first watched this in March 1977, totally creeped out by its insinuations of vituperative rural magic against a sleazy underbelly to the urbane. More than this though, it's the titular photograph of the play that infected my imagination and still does. It's an entirely conspiratorial photograph, like Mary Moorman's grassy knoll or Antonioni's BlowUp.

Without spoiling the plot, a smarmy Radio 3 art critic receives a photograph in the post – it shows two flirtatious, country girls sitting outside a small white caravan. One blonde, one raven haired, Abbaesque, in a way, though there's something occult about them, troubled and troublesome, likely to experience poltergeist intrusions beneath a Starsky and Hutch poster. It's the grain of The Unexplained magazine. Definitely archetypes of naughty paranormality in the 70s. Anyhow, the critic's hopelessly nervous and downtrodden wife becomes obsessed with the photograph, blowing it up to massive proportions. In doing so, she discovers it's not two girls, but one, they both have the same faded tattoo on their arm. Cut to the music critic, in bed with his lover, an alabaster heart on the cabinet. We don't see his lover's face but there's the same tattoo on their arm..... as a clue to its meaning, I can't help hearing Coil's Tattooed Man recalling this scene. The ending is a total cognitive twist of the magic box, similar to that we see in Mulholland Drive. Never quite resolved, but throwing up unpleasant characters and permutations all the way. But unlike the over-saturated America of Lynch, it was the cheap plywood sets of Play for Today that suggested the beige misery of 70s suburbia could easily give way to a realm of pagan and terrifying energies. 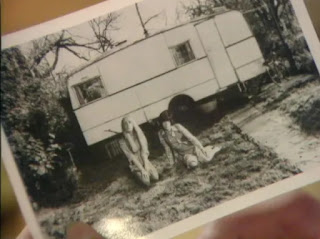 It took me years to rediscover A Photograph and I was delighted to find it was intended as an oblique sequel to the more cult and vaunted Play for Today episode, Robin Redbreast. Both A Photograph and Robin Redbreast were written by John Bowen. Again, A Photograph, like all true intrusions in our wyrd biography, haunted me from the future. I suspect the shudder watching it in 1977, was as much from today's influence as its creepy Lynchian English vibe. Replace Bobby Peru in the trailer park of Lynch's nightmare, with the outcast family living on the periphery of all our villages.

But it's really the mystery of searching too much into an image that worked its way into my creativity. Pareidolia in the media age, that phantoms readily appear in the magnified darkrooms of Polaroid technology. David Lifton who first uncovered the Badgeman in Mary Moorman's JFK photo, has now identified 5 assassins staked out along the wall. No doubt about it these are shadow agents from the deepest cortical folds. Poltergeists of our innate tendency to paranoia in a hostile environment. The wife in A Photograph is gaslit into mad obsession, the blown-up picture revealing another plot behind surface reality. 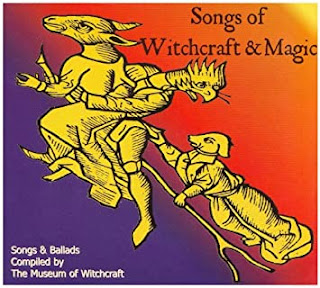 I used to visit the pagan supply shop in Ipswich, often just to imagine the possibilities of an off-kilter English Heritage souvenir shop. I've bought all kinds of magical tat from this shop, a Baphomet statue with removable horns, a plastic necromancer's skull, and bags full of Horned God incense. I often tried to play live swathed in incense, and no matter when I visited the supply shop and whatever auspicious calendrical date the gig fell on, they would always recommend the male energies of the Horned God incense. It was like a sketch from an occult Fast Show, “Horned God it will be again, Sir”.

Anyway, I took a chance on this CD compilation from this shop, an album curated by The Museum of Witchcraft and was totally bowled over by Peter Bellamy's “Nostradamus”. The song was written by Al Stewart, the lyrics lifted from Erika Cheetham's controversial interpretations of Nostradamus' predictions. Stewart's version is great, a bongo and acoustic guitar driven epic, however Bellamy's take is far more haunting. Delivered in a baleful medieval bellow, accordion wheezing like an emphysemic sailor, it's a time-travelling shanty for sure. It is though the verse alluding to the deaths of the Kennedy brothers, JFK, Bobby and Joe that really captured me:

In the new lands of America, three brothers now shall come to pass.
Two alone are born to rule, but all must die before their hour. 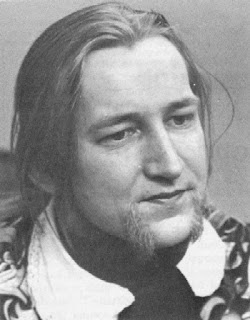 JFK and Bobby's assassinations were American nightmares, televised live, but Joe Kennedy died over English skies. He had volunteered for a suicidal bombing mission, flying from Fersfield in Norfolk, his Torpex loaded plane exploding over Blythburgh in Suffolk. I created a black plaque for Joe Kennedy and shortly after discovered this song. It feels like this is the real soundtrack to that plaque. There's another lyric in the song that perfectly sums up history's violent ricochet and psychodrama, one that has propelled the doom laden course of the project:

Oh the more it changes, well the more it stays the same,
And the hand just rearranges all the players in the game.

I do believe the key to discovering our personal wyrd is to apprehend the paranoid doubling so inherent in our imagination. The same primal images re-emerging ever more forcefully, on different landscapes with different characters

Again, though there's so much music from “England's Hidden Reverse” that are conscious influences, I've chosen “Nostradamus” because it has become a completely unintentional touchstone. The litmus of my wyrd.

Bellamy committed suicide in 1991. He was actually from Norfolk, where Kennedy flew to his death. Oscillations of tragedy, Bellamy killed himself feeling his career was on a downward trajectory. Kennedy applied for the suicidal flight mission to steal back the mantle from his brother, who had become a war hero. There's Greek myths everywhere if we care to look. I think Bellamy, had he survived, would have had his day again, like Shirley Collins, Simon Finn and Bonnie Dobson. It makes the song all the more poignant that he could not foresee his future vindication.

If you enjoy what we do here on Wyrd Britain and would like to help us continue then we would very much welcome a donation towards keeping the blog going - paypal.me/wyrdbritain
Affiliate links are provided for your convenience and to help mitigate running costs.
Posted by ian holloway at 15:05