The War Hound and the World's Pain 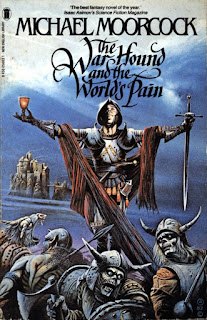 "The forest flourished, a lush and spreading refuge from the Wars, coolly green and welcoming. Beyond its borders the land burned flame red, blood red, ghastly black. Men and women, hacked to death, choked the paths and streams as the Armies of Religion clashed and slaughtered. Carrion-hung gibbets loomed starkly through the smoke and all the land was desolate. The forest was a refuge. Yet silent, utterly silent and without life, as through it wearily rode the War Hound, Graf Ulrich von Bek. To come suddenly on a castle."

This is the story of Ulrich Von Bek and his quest for the grail at the behest of his master Lucifer who has tired of Hell and wishes to return to a state of grace.

Von Bek is a soldier of the 100 year war, a mercenary captain of some skill but no reknown.  Finding his way to a deserted castle he meets his love and acquires an insight into the fate of his soul and a bargain that would enable him to avoid it.

In the great fantasy tradition this is a quest book but one that is more travelogue than most.  We are subjected to little, very little, of the tedious hacking and slashing and girding of loins that generally comes with the territory and in it's place is a tour of the worlds that Bek must traverse and a meditation on just what the grail is when he eventually finds it.

It makes for an enjoyable read for a non fantasy head like me.  There are links to the Elric books in the manner of the world - not to mention the Elric / Ulrich hint - but strangely for a book about Heaven and Hell and all points in between this is a much more grounded read than I was expecting and is all the better for it.

Affiliate links are provided for your convenience and to help mitigate running costs.
Posted by ian holloway at 15:53