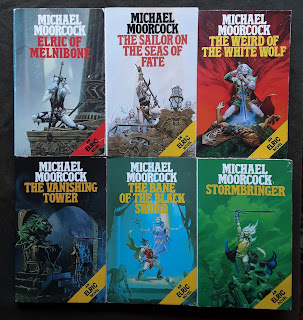 Elric the albino emperor of Melnibone an island of decadent elven-ish sorcerors has long been the most beloved of Michael Moorcock's creations.  Armed with his black soul-eating sword Stormbringer  Elric is one of the aspects of Moorcock's Eternal Champion charged - whether they like it or not - to maintain the balance between order and chaos across the multiverse.

Apart from the first book (published in 1972) the stories were originally published in the pages of Science Fantasy magazine in the early 1960s as a series of novellas and then collected together into the series of books below with their iconic Michael Whelan covers in the 1970s.

My partner bought me the almost set of the Grafton Elric books for Xmas after we found them in a junk shop last November.  It was unfortunately missing the first book and it's taken me several months to track a copy down.  I've long had a hankering to re-read the full series and once I finally had the set in my hands I dove right in and read the lot in a week and thought I'd lay them all on you in one go. 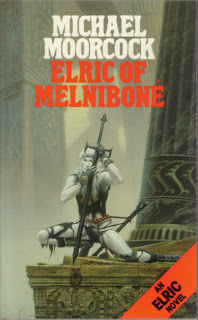 This is the tale of Elric, later called Womanslayer; of his love for Cymoril and of the rivalry with his cousin Yrkoon, a rivalry that was to bring the Dreaming City crashing in flames, destroyed by the reavers of the Young Kingdoms.
Elric, red-eyed, albino, the inheritor of waning powers, his strength precarious, sustain by arcane drugs. A hero seemingly unfit for his role. His story treats of monstrous emotions and high ambitions, of sorceries and treacheries, agonies and fearful pleasures - an adventure that Elric was to remember on in his darkest nightmares.

Elric, the fey albino king of a fading island power, Melnibone, is beset by challenges on all sides.  From without by the humans of the 'young kingdoms' jealous of Melnibone's wealth and vengeful for its past despotism and from within by his covetous cousin Yrkoon who believes Elric unfit to rule and it is he who drives the story.

As Elric strives to foil the usurper we are introduced to mythology that feels real and which is lacking in the tedious cod-Arthurian / Robin Hoodisms that make much fantasy literature such a bore.  The Chaos Gods seem suitably quixotic without being tediously evil and even at this early point there feels to be a fully developed and complete vision of all levels of the world.

The story itself is fairly slight and tells quite a straight forward story but that's not the joy here.  The joy is the invention and the bold vision that has created so singular a character as the albino king. 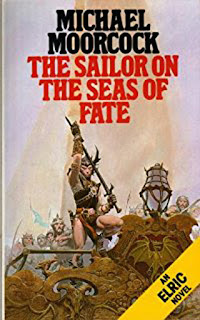 The Sailor on the Seas of Fate

Leaving his cousin Yrkoon sitting as regent upon the Ruby Throne of Melnibone, leaving his cousin Cymoril weeping for him and despairing of his ever returning, Elric sailed from Imrryr, the Dreaming City, and went to seek an unknown goal in the world of the Young Kingdoms where Melniboneans were at best, disliked.

After rescuing Cymoril and rather stupidly placing his treacherous cousin on the throne of Melnibone Elric begins his year long odyssey to try and understand the new world.  Unfortunately fate has other plans for him as he finds himself aboard a strange boat alongside other incarnations of the Eternal Champion, Erekose and Corum.  It's a quest book but one with a bit of a difference as Elric is a truly unwilling participant especially after events take on a bafflingly cosmic turn.

The second of the trio of tales here is by far the weakest.  Indeed in the time between reading the book and writing this review I had completely forgotten about a large section of the story where Elric and his new companion Smiorgan rescue a young girl who may or may not be the reincarnation of someone from an ancient Melnibonean myth from someone who was actually there.

The book ends strongly with a journey into the history of Elric's race as he accompanies explorers to his race's ancestral homeland.  Again the story is a pretty linear journey, a from points A to B sort of deal, but one that feels like a crucial step in the development of the overarching story.

Another fun instalment with a not unenjoyable middle section buoyed up by the two very enjoyable tales either side of it. 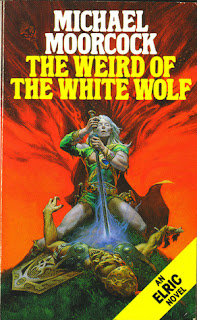 The Weird of the White Wolf

"We must be bound to one another then. Bound by hell-forged chains and fate-haunted circumstance. Well, then - let it be thus so - and men will have cause to tremble and flee when they hear the names of Elric of Melnibone and Stormbringer, his sword. We are two of a kind - produced by an age which has deserted us. Let us give this age cause to hate us."
Imrryr, the dreaming city; Yyrkoon, the hated usurper; Cymoril, the beloved... all had fallen to the fury and unearthly power of the albino prince and his terrible sword. An Elric faced at last the fate that was to be his in this haunted era - that he must go forth, sword and man as one, and havoc and horror would be forever at his forefront until he found his Purpose that was yet obscured to him.

The third Elric book finds him suddenly heading back to Melnibone all tooled up with an army of Young Kingdom fighters at his back to exact revenge on his cousin who had been just as awful a ruler as everyone except Elric had predicted.  The raid has typically tragic consequences but a depressed Elric is soon drawn into another quest.

This time out he again tangles with the minions of chaos and makes a friend in the shape of Moonglum a cheerful little chappie who provides a perfect foil to Elric's morose nature.

Like the previous book this is essentially several novellas detailing adventures along the way of Elric's life which makes them fast and fun to read as they refuse to allow themselves to get bogged down and instead revel in their pulpy glory. 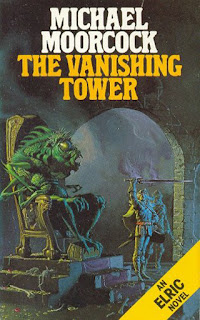 Elric of Melniboné, proud prince of ruins, last lord of a dying race, wanders the lands of the Young Kingdoms in search of the evil sorcerer Theleb K'aarna. His object is revenge. But to achieve this, he must first brave such horrors as the Creatures of Chaos, the freezing wilderness of World's Edge, the golden-skinned Kelmain hordes, King Urish the Seven-fingered with his great cleaver Hackmeat, the Burning God, the Sighing Desert, and the terrible stone-age men of Pio. Although Elric holds within him a destiny greater than he could ever know, and controls the hellsword Stormbringer, stealer of souls, his task looks hopeless - until he encounters Myshella, Empress of the Dawn, the sleeping sorceress.

The fourth of Moorcock's Elric novels continues the albino's pursuit of the of the magician who had plagued him in the previous volume.  This time across the three novellas that make up the book Elric battles him at the world's end, in the city of the beggars and in Tanelorn the eternal city beyond the battle between chaos and order.

We get to meet several aspects of the Eternal Champion - Corum and Erekhose - and learn slightly more regarding Moonglum and the nature of his link to Elric.

As ever Moorcock delivers a super fast and very readable romp filled with hacking and slashing and soul stealing which is, as always, great fun. 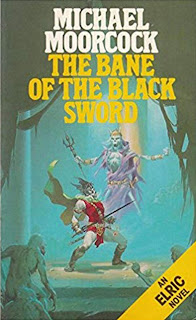 The Bane of the Black Sword

Elric returns to Yishana, and finds peace at last. Meanwhile, at the world's rim, dragging red horror in its wake, a horde unimaginable moves on the fabled, gentle, impossible city Tanelorn.

Continuing directly on from the fourth volume Elric is once again being plagued by the twin threats of the sorcerer Theleb K'aarna and his spurned once lover Queen Yishana a reckoning with whom brings the albino back in contact with the remnants of his former people.

The second story finds the albino falling rapidly in love with a stranded maiden, Zarozinia, in the hellish Forest of Troos where he and Moonglum are forced to fight the dead.

The third tale tells of a break in Elric's newly idyllic existence in the arms of his new lover as he is once again forced to take up his sword to defend his new home.

The book ends then with an epilogue that allows us to revisit the land of Tanelorn and those that live there as the beggars of Nadoskor march on the city to take it for Chaos.  It's a lovely little diversion from the Elric stories and gives us a glimpse of the wider world of the Eternal Champion that exists in Moorcock's mythos and the ways in which he thinks of the roles of Order and Chaos within his tales.

As with the other four books, these Elric novellas are fleeting and fun twists on the whole girded loins, hack 'n' slash brand of fantasy with the added extras of Moorcock's deliciously anarchic sensibilities at the helm. 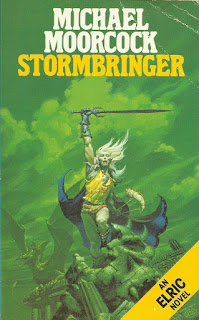 The epic tale of Elric of Melniboné, albino prince of ruins, moves to its awesome conclusion - with the whole of the natural and supernatural world in mighty conflict - the final conflict, Armageddon. Elric holds the key to the future: the new age which must follow the destruction. To turn that key he must sacrifice all that he loves and risk his very soul.

Stormbringer is the final part of the original Elric stories and tells of the final battle between the albino misery guts and the forces of chaos that are rapidly turning the world into tentacles and ooze.

As an end to the series it's quite satisfying but there are a few hiccups along the way, two of the turning point battles are very much glossed over with both using unwielded floating magic swords to win the fights.  It does feel very much like Moorcock has lost interest in that side of things which I suppose is entirely understandable, I imagine there's only so many ways you can write about Elric stabbing someone.

It does though come to an entirely apt conclusion.  The end when it comes is definite and true to what has gone before and wrapped the legend of Elric up perfectly right up until Moorcock decided to write some more.

If you enjoy what we do here on Wyrd Britain and would like to help us continue then we would very much welcome a donation towards keeping the blog going - paypal.me/wyrdbritain
Posted by ian holloway at 16:13