The Rise and Fall of the Trigan Empire vol.1 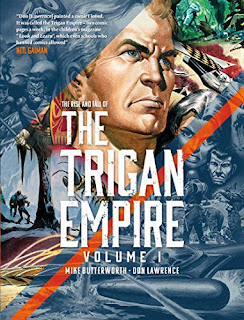 The first of a four-volume series reprinting The Rise and Fall of the Trigan Empire - a landmark 1960s science fiction series which rivalled Game of Thrones in popularity and was the precursor to every mythic sci-fi adventure to come!
Under the leadership of Trigo, the Vorg tribesmen band together to resist the Lokan invaders, forming a new country, The Trigan Empire. This is the epic story of its rise and fall.
Featuring an extraordinary combination of the Roman Empire and ancient Greece, Trigo’s story is told in ground breaking fully painted artwork. This is the first in a series collecting all the stories painted by the legendary Don Lawrence. 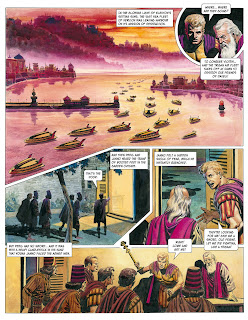 I first came across The Trigan Empire back when I was a kid and Hamlyn released a big beautiful hardback collection that I adored.  Over the years I've treasured that one and the later Hawk Books edition spending many, many hours poring over them.  Fast forward to 2020 and Rebellion (home of 2000ad) has embarked on a reprint of the entire series in 4 big, bold and beautiful collections.

Now it's got to be said that the strength of this series doesn't lie in Butterworth's scripts, they are workmanlike at best and hackneyed and repetitious at worst.  There's a reason why whenever Trigan Empire is discussed it's in reference to Don Lawrence's stunning artwork but the writing is what it is and I've grown up with these stories - this book being mostly identical to the two older volumes I have - so I'm fairly inured to it and enjoy it for what it is.

The world of The Trigan Empire is one that mixes Roman tropes and spaceships, horseback warriors and hover tanks, sailing ships and giant robots.   It was the perfect showcase for the artist's skills and he delivered again and again and again with artwork that you can lose yourself in for hours, his beautiful panels lifting the story to new heights.