Ghost in the Water 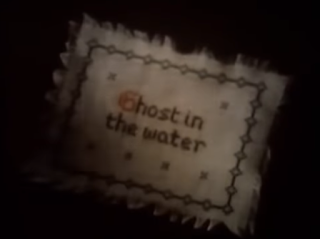 Based on the 1973 novel of the same name by Edward Chitham this ghostly tale was only ever screened the once on UK television - BBC1 at 4:40pm on New Year's Eve 1982 - and then disappeared into obscurity.

Directed by Renny Rye (who would later make 'Box of Delights') the story revolves around Tess (Judith Allchurch) and David (Ian Stevens) and their history project into the death of a young local girl named Abigail Parkes in the 1860s who begins to haunt Tess with visions of her life and ultimately of her death.

The two young and untrained actors are a delight helped in no end by a strong supporting cast and a script that delivers both on story and on quiet humour particularly from Tess' mum played by 'Last of the Summer Wine' regular (appearing in 273 episodes over 27 years) Jane Freeman. 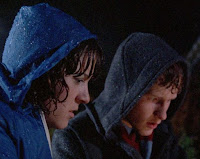 Rye obviously has an eye for the supernatural, opening the film on a dark and rainy night with the two kids rooting around in a graveyard from which he cuts to a purpose made horror movie on the family television and including not one but two drowning sequences one of which features Tess simulating the experience in her bath which must have been an unexpected and shocking experience for anyone watching in its original tea time slot and not a scene you could imagine in any modern children's drama.

Drowning aside 'Ghost in the Water' is a fairly gentle film with a real warmth to it that plays off the relationship between the two kids, their classmates and Tess' family.  The narrative rolls along nicely and Rye makes good use of the limited run time to tell a concise story and one that is unexpectedly impactful and it's a real shame that this film has been mostly forgotten.

Buy it here - Ghost In The Water [DVD]

If you enjoy what we do here on Wyrd Britain and would like to help us continue then we would very much welcome a donation towards keeping the blog going - paypal.me/wyrdbritain
Posted by ian holloway at 10:40