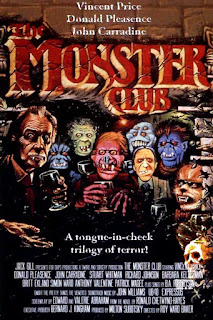 The 1980s wasn't exactly what you'd call a golden era for British horror movies.  There were some good TV series and some good novelists but the horror movie industry in the UK mostly gave up and stayed home.  It did though occasionally pop its head out from under the bed and give us the goods.

Very loosely adapted from stories written by British horror writer R. Chetwynd-Hayes, 'The Monster Club' is, in the great tradition, a portmanteau featuring three tales told inside a framing story which in this instance involves a vampire named Eramus (Vincent Price) taking the human author also named R. Chetwynd-Hayes (John Carradine) that he's just chewed on for a drink at the titular club.

In the club we and Chetwynd-Hayes are treated to four musical performances by The Viewers, B.A. Robertson, Night and The Pretty Things and three stories about a shadmock, a vampire and a ghoul. 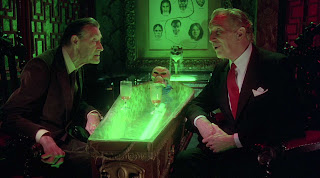 Like the music the three stories vary wildly in terms of quality.  The story of the lonely shadmock (James Laurenson) with its murderous whistle being robbed by heartless villains Barbara Kellerman and Simon Ward  feels like a filler story that has fallen out of one of the Amicus anthologies which is hardly surprising given that this particular movie was produced by that company's founder Milton Subotsky and directed by the great Roy Ward Baker who'd made two of them ('Asylum' & 'The Vault of Horror').  The vampire tale is played strictly for laughs featuring a frumpy looking - if such a thing is possible - Britt Ekland and The Spirit of Dark and Lonely Water himself Donald Pleasence as a civil service vampire hunter. The third story, and according to Chetwynd-Hayes the only one to resemble his source material, is the most effective and tells of a horror movie director searching for locations who happens upon a mist shrouded village where he is set upon by corpse eating ghouls and has to take refuge on holy ground all to a lovely, haunted synth tune called 'Ghouls Galore' by Alan Hawkshaw and some fantastic John Bolton illustrations. 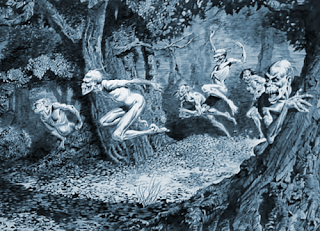 'The Monster Club' was a flop on it's original release in 1981 and it's not hard to see why,  even at the time it was horrendously dated looking, the monster costumes laughably cheap and shoddy, the stories daft and the acting hammy but to me all those things sound like positives and I have long loved this film since I first saw it on my old black and white portable TV with both me and the television set hiding under the blankets because it was on late on a school night.

If you enjoy what we do here on Wyrd Britain and would like to help us continue then we would very much welcome a donation towards keeping the blog going - paypal.me/wyrdbritain
Posted by ian holloway at 10:51