Ringstones and Other Curious Tales 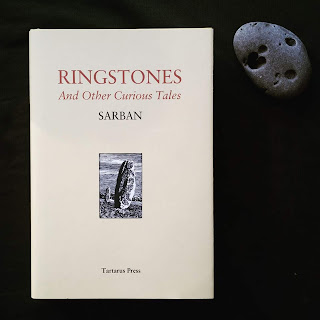 Ringstones and Other Curious Tales ‘have a curiously-imparted quality of strangeness; the feeling of having strayed over the border of experience into a world where other dimensions operate.’ So said one of the original reviewers of these unique stories, first published in 1951.

John William Wall was a British diplomat who worked in various Middle Eastern contries and who published three books under the pen name Sarban.  'Ringstones' was the first of the three and collected five stories , two set in the Middle East, one in Greece and two, including the title piece, set in the UK.

I'd been intrigued to read Sarban for a while having first discovered him by accident having uncovered a hideously lurid paperback edition of his 'The Sound of His Horn' with a drawing of a cross-eyed cat lady on the cover.  Indeed the cover art was so bad that I found I couldn't read it and so traded it in and used the proceeds to buy two nicer Tartarus Press editions.  Memories of the awful art are still too fresh so I decided to delve into Ringstones first, with the thought of a stone circle helping make my decision.

Opening the book is the quick and slight 'A Christmas Story' about a pair of Russian aviators stuck in the middle of nowhere as winter starts to bite who have a close encounter with a creature of some sort.  For me the framing device here was of more interest than the story and felt a little more considered than the story within.

'Capra' is a far more interesting prospect that builds slowly from an almost unconnected opening act into a nifty little tale of vapid society life and old gods.  It's filled with vibrant characterisations and a real sense of crushing inevitability.

The surprise gem of the book proved to be 'Calmahain' a beautiful, bittersweet tale of two children taking refuge from the restrictions of their home life in a deeply imaginative fantasy.  I was however much less enamoured of 'The Khan' which while boasting the delightful prose I've come to now expect was just a weak and unexceptional tale, particularly after the wonders of its predecessor.

The book's title piece, also its longest, proved to be another wonder.  Sarban seemed to be at his strongest when dealing with stories that embraced the myths and legends of, not necessarily his homeland, but those he would have grown up with.  Here a young lady is hired for the holidays to act as tutor and governess for a trio of children at Ringstone Hall.  Over the course of a preternaturally sunny summer she is slowly drawn under the spell of the young boy and embroiled more deeply in his play until the actuality of her dilemma finally dawns.  It's a wonderfully enchanting piece spoiled somewhat by a coda that seemed heavy handed and unnecessary.

As a whole though the book turned out to be a revelation.  Wall's prose is captivating and his ideas are gently terrifying and occasionally achingly beautiful.  There is a common theme of confinement and of being trapped that runs through the stories that one can't help but relate to the writer inside the diplomat but it's very pleasing to know he did occasionally break free.

Buy it from the publisher at the link above.