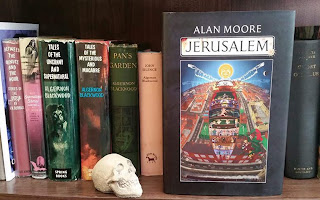 Begging comparisons to Tolstoy and Joyce, this “magnificent, sprawling cosmic epic” (Guardian) by Alan Moore—the genre-defying, “groundbreaking, hairy genius of our generation” (NPR)—takes its place among the most notable works of contemporary English literature. In decaying Northampton, eternity loiters between housing projects. Among saints, kings, prostitutes, and derelicts, a timeline unravels: second-century fiends wait in urine-scented stairwells, delinquent specters undermine a century with tunnels, and in upstairs parlors, laborers with golden blood reduce fate to a snooker tournament. Through the labyrinthine streets and pages of Jerusalem tread ghosts singing hymns of wealth and poverty. They celebrate the English language, challenge mortality post-Einstein, and insist upon their slum as Blake’s eternal holy city in “Moore’s apotheosis, a fourth-dimensional symphony” (Entertainment Weekly). This “brilliant . . . monumentally ambitious” tale from the gutter is “a massive literary achievement for our time—and maybe for all times simultaneously” (Washington Post).

When this came out in 2016 I knew I'd read it at some point when I was less preoccupied with things like relearning how to walk and it was too big and too pricey for me at the time.  Roll on 3 and a half years and there's a hardback first edition sat in the shop and I have a discount card so the time had come.  All told it's taken me most of about 7 months to read it as I began by deliberately limiting myself to only reading a chapter and interspersing themwith other books but when lockdown hit I got my head into it and read about 900 of its 1174 pages in the ensuing fortnight.

So the burning question is "What's it like?" and the answer quite simply is "It's Alan Moore."  It's pure unadulterated Moore unfiltered by corporate diktat, unsullied by collaborators and unhinged by choice.

Like Moore's first novel, 'Voice of Fire', 'Jerusalem' is set almost entirely in his home town of Northampton, in particular it's set in a neglected and working class area called 'The Burroughs'.  It follows the fates of various members of one family - the Vernalls and later the Warrens - from the Victorian era to, well, to the end of time but mostly to around 2006 and from Lambeth and St Paul's Cathedral to the afterlife, the upstairs or 'Mansoul' as it's called. 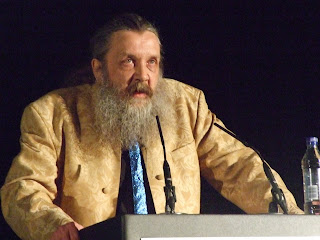 The Vernalls / Warrens are eccentrics and artists touched by the Angles, they are the keepers of the boundaries even if, for the most part, they don't know this.  The story tracks various generations along with various folks both living and dead with whom their lives intersect over a couple of fateful days in 2006.  We meet Snowy and the two Mays, we meet Alma (essentially Moore himself) and her / his younger brother Mick, we meet cousin Audrey, Marla the saint, Lucia Joyce (in a painful chapter written in the style of her father's 'Finnegan's Wake' which I'd never wanted to read and now want to even less), John Clare, Thomas and Samuel Becket(t), former slave and now ghostly mayor Black Charlie and assorted other ne'er do wells and luminaries (sometimes simultaneously) but mostly we meet The Burroughs.

Jerusalem is a love story between an author and his home town, it's a travelogue, a love letter and a homage, albeit one with an entire second book set in a ghostly heaven where children run riot and Arch-Angles knock seven shades of gold out of each other with their billiard cues in a gloriously unrestrained cosmic Enid Blyton romp.

At the book's end I was exhausted but fizzing, there were parts that had me laughing aloud, parts that gripped my heart and parts that I'd pay money not to ever have to read again.  I've been reading Moore since I was a kid and in that time he has produced books that hold special places in my affections - DR & Quinch, Miracleman, V For Vendetta, From Hell,  Lost Girls, The League of Extraordinary Gentlemen and so many others - books that I love dearly.  I will essentially follow him anywhere he wants to go and to my mind he's more than earned the right to do whatever the fuck he wants and if that's a 1200 page cosmic exploration / meditation / conjuration that puts Northampton at the centre of the universe then I'm very happy to go along for the trip because you know that that's exactly what it's going to be.

I'm never reading it again though, that thing was really bloody heavy.

If you enjoy what we do here on Wyrd Britain and would like to help us continue then we would very much welcome a donation towards keeping the blog going - paypal.me/wyrdbritain
Posted by ian holloway at 14:06