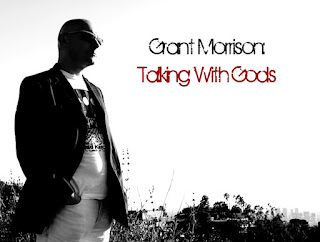 Grant Morrison is a Scottish writer most well known for his work in comics where he has written some of the biggest selling titles - Superman, Batman, Justice League and X-Men -from the big two companies. Here in the UK he made his name writing the pop star superhero Zenith (buy it here

Over the last three and a bit decades he has amassed both an impressive body of work and a fearsome reputation within his field both for rejuvenating tired old titles and providing innovative new creations of his own.

I remember first reading Morrison when he appeared in 2000AD where the work he was producing immediately marked him out as a writer to watch.  With his move to the US based publishers his output inevitably slewed towards the superhero genre that is those companies' bread and butter.  Happily his take on the spandex botherers was altogether new and he immediately hit the ground running with the post modern hi-jinx of Animal Man (buy it here

) and the gloriously strange Doom Patrol (buy it here

) when he quoted it - “Child be strange, dark, true, impure, and dissonant. Cherish our flame. Our dawn shall come.” - at the end of the 'Brotherhood of Dada / Magic Bus' storyline and which has recently become an enjoyably daft TV show.  Morrison's creator owned work has, for a superhero ambivalent like me, been a source of reliable enjoyment with titles such as WE3 (buy it here

) & the Moorcockian magical anarchists of The Invisibles (buy it here

) a series I've returned to again and again over the years.

The documentary below was produced by the Sequart Organisation who also made the Warren Ellis documentary 'Captured Ghosts' and as you'd expect provides a thorough overview of Morrison's life and career with contributions from a cavalcade of comic luminaries and along the way investigates his key work, his parents, his alien abduction and his interests in chaos magic and psychedelics.

If you enjoy what we do here on Wyrd Britain and would like to help us continue then we would very much welcome a donation towards keeping the blog going - paypal.me/wyrdbritain
Posted by ian holloway at 13:30