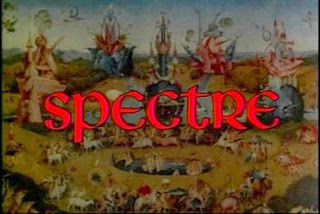 In 1977 Gene Roddenberry co-wrote (with Samuel A. Peeples) and produced this pilot episode for an unrealised TV series about an American criminologist and occult detective called William Sebastian (Robert Culp) who, with his colleague Dr. "Ham" Hamilton (Gig Young), comes to the UK at the request of Anitra Cyon (Ann Bell) who worries that her brother has come under the influence of malign forces.  Unfortunately for them the gloriously pompous Sir Geoffrey (James Villiers) is quite happy as he is having surounded himself with a coterie of glamorous beauties to attend his every whim and who seems quite determined - for some unfathomable reason - to foil their investigation.

Rounding out a strong cast are luminaries such as 'the First Lady of Star Trek' Majel Barrett-Roddenberry, a very young looking John Hurt fresh from playing Caligula in 'I, Claudius', and Gordon Jackson who was to take on the role of George Cowley in The Professionals that same year. 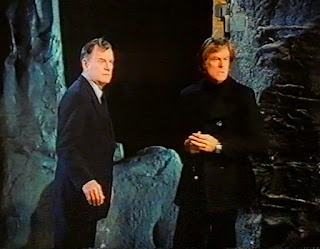 Directed by Clive Donner it's got the look of a US TV show to it and whilst it makes a valiant attempt at evoking the glory days of British gothic horror it all looks far too bright and clean and 'made for TV' to really succeed and the bacchanalian black mass at the finale - to which they added plenty of bare breasts once they knew it wasn't getting picked up - is (unintentionally) very funny indeed.

I am though a real sucker for an occult detective yarn and combined with some fabulous incidental music by the wonderful John Cameron ('Psychomania' and 'Kes') this is always going to attract my attention.  Truthfully it's not up to much and it's not hard to see why it never made it to series but it does have it's charms and if nothing else is a fun way to while away 90 minutes.