The Ballad of Tam Lin 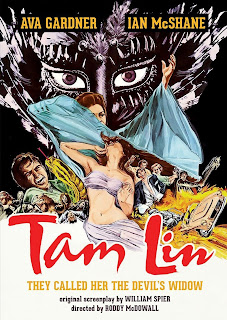 In 1968, at the height of his ape fame, Roddy McDowell took a break from the prosthetics to take his one and only turn in the director's chair to make his adaptation of the Scottish ballad, 'Tam Lin'.

The original story tells of the rescue of Tam Lin by his true love, Janet, from the Queen of the Fairies where he is at risk of being given as a tithe to Hell. In order to save him Janet braves the Queen's magic as Tam is changed into various creatures and even burning coal until the Queen grudgingly admits defeat.

In McDowall's retelling Michaela Cazaret (Ava Gardner) is a rich and seemingly benevolent den mother surrounding herself with and indulging her glamorous coterie of hipsters as they engage in a nonstop party at both her city and country homes.  When her current favourite Tom Lynn (Ian McShane) falls for the local vicar's daughter (Stephanie Beacham) and begins to pull away from her Michaela's true nature comes to the fore and things take on a much darker hue.

'The Ballad of Tam Lin' has had a troubled existence. Shelved by the studio for several years it's eventual release as 'the Devil's Widow' meant that it had to a great extent missed it's moment and the woeful tagline they saddled it with - 'She drained them of their manhood ... and then of their LIVES' - certainly couldn't have helped. It was finally restored in the late 90s to reflect McDowall's original vision. 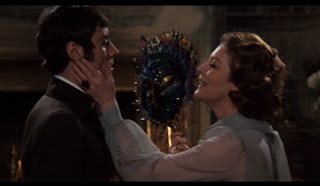 McDowall obviously has an actors eye for a talented colleague and populated his film with a rock solid cast including Richard Wattis, Cyril Cusack, Sinéad Cusack, Magpie's Jenny Hanley, Withnail & I's writer / director Bruce Robinson and Joanna Lumley who gets to deliver the immortal line, "Life is an illusion therefore nothing is permanent. I think I shall go to Sweden" and it has a soundtrack by acid folk band Pentangle that is redolent of the traditional setting and entirely relevant to the modern and composer Stanley Myers' score for the psychedelic nightmare of the hunt is astonishing.

It's a shame that McDowall was never again to direct as he has an interesting eye and his is a bold, engaging and respectful take on the story that deserves a wider audience.

If you enjoy what we do here on Wyrd Britain and would like to help us continue then we would very much appreciate a donation towards keeping the blog going - paypal.me/wyrdbritain
Posted by ian holloway at 13:18