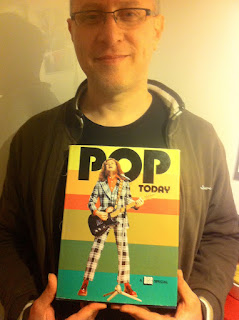 Kevin Foakes is a DJ, designer and writer most widely known under his Strictly Kev and DJ Food aliases.

Originally a team effort with the members of Cold Cut and others DJ Food is now a Strictly Kev vehicle which most recently he's been using to present ear and eye candy multimedia extravaganzas around artists such as Boards of Canada and Kraftwerk and his design work has graced the covers of albums by folks like Frankie Goes to Hollywood, The The and The Herbaliser amongst others.

His social media is one of the most joyously enthusiastic places where he shares his love of all things music, movie and comics and the mixes he shares on his mixcloud account are compulsive listening.

We are very happy to present to you his 3 Wyrd Things and should you be intrigued you can find him via the links below. 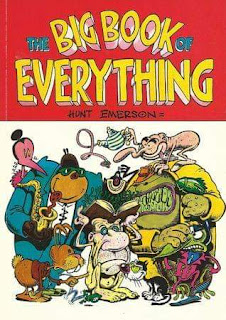 Book
Big Book of Everything
Hunt Emerson
Buy it here

I chanced upon this compendium of Hunt Emerson’s work for British underground publications around the the mid 80s, hidden away in a book shop in Crawley. Not yet living in London and with comic shops at that time only the provision of the big cities, I used to scour new and used book shops for anything that looked interesting. The art sections of the larger shops would sometimes have the Paper Tiger imprints, Roger Dean, Rodney Matthews, the Album Cover Albums and books from the odd US artists like Rick Griffin or Stanley Mouse. If you were lucky you’d find an H.R, Giger book or a British translation of a Moebius collection, not that I could afford them.

Somehow Hunt’s book was on the shelves too (remember this is long before ‘graphic novel’ sections were a thing in book shops) and, intrigued by the artwork, I bought it, determined to find out more. Just the contents page alone opened up a whole hidden comic world that was unknown to me with each publication listed that the material was taken from. Streetcomix, Knockabout, Yikes, Escape, Commies From Mars, Fortean Times, Moon Comix - where could I find all these? The truth was, nowhere for a long time as many of them were small press titles, the internet and eBay were years away and even now, some of these are still rare.

But that didn’t matter, the characters presented : Calculus Cat, Max Zillion, Alan Rabbit , Shekel & Shark and Hunt’s constantly shifting, Krazy Kat-inspired backgrounds were like nothing I’d ever seen before. This book led me to seek out Hunt’s work anywhere I could find it and my first trips to Forbidden Planet and comic marts in London yielded his excellent Thunderdogs comic, Firkin, and of course, Knockabout Comics. This in turn led to Zap Comix, Robert Crumb, Gilbert Shelton and the American underground scene. Years later, and with a fairly decent underground comix collection to show for it, this is the one that opened the door. 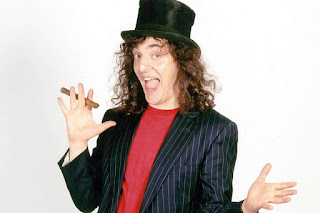 From Wikipedia:
The Pall Bearer's Revue is a 1992 sketch and stand-up comedy show written by Jerry Sadowitz and starring Sadowitz and Dreenagh Darrell. Each episode featured a mixture of sketches, comedy monologues from Sadowitz, as well as magic tricks including a special section dubbed "The Roy Walton Moment" in which Sadowitz would perform a magic trick invented by his mentor, famed magician Roy Walton. Although not as abundant with profanity or scatological humour as Sadowitz' live stand up, the show nevertheless made heavy use of tasteless and aggressive blue comedy and has been described as one of the most controversial comedy series ever broadcast in the United Kingdom. The final episode ended with the studio being invaded by the armies of all the countries Sadowitz had offended over the course of the series, who then gunned down Sadowitz and Darrell.

As a result of the record number of viewer complaints sent to the BBC, The Pall Bearer's Revue was rescheduled to a late night slot, had negative continuity announcements air before the show, and has never been repeated or released on home video or DVD.

I watched this as it went out each week (and still have the video tape of each episode) with open mouth as it was very extreme for TV, a bit like seeing the Young Ones but a decade later, older and wiser, still a shock. A show like this couldn’t be made today as the political correctness inherent in our society (in most cases, quite rightly) would never let it get off the page. It was also my first introduction to Sadowitz the magician, something I was unaware he was even involved with having only heard his album ‘Gobshite’ and of his fearsome reputation. He is a genuinely spellbinding performer and the magic balances the comedy superbly in the show. There’s nothing of this I can find online so maybe I should encode my copy but I hear he’s very good at keeping his material off the web. Definitely one of the UK’s forgotten comic treasures. 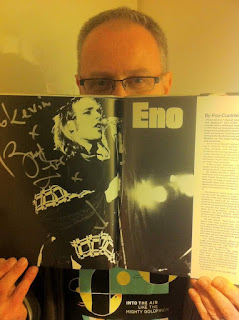 Eno’s importance in my life extends in many directions. The music is of course primary but his installations, creative thinking and work outside the music industry is always of interest too. I was a late-comer to his works, only really discovering him in the early 90s via the resurgence in ambient music. I’d missed Roxy Music (too young for his period with the band and uninterested in the 80s version), also just too young for his No New York years with Devo and Talking Heads. As with most things he was always ahead, had just left the party, arriving before most had even heard one was on, finger on the pulse and by the time you’d caught up he was onto something else.

In this respect he’s an inspiration, an artist who means many things to many people in many different spheres. Many cite Bowie in this respect but his music never meant as much to me (good as some of it is) as Eno’s. His 70s and 80s period records and collaborations are virtually faultless and still fascinating when shown in context with the times they were released in, he certainly never followed fashion. His 90s discography is a patchier affair but one which I’ve been digging into recently and it’s yielded some treasures for sure. I’ve also found myself more susceptible to his generative installation soundtracks of late when in need of some calm and non-distractive music to work to.

I met him once, at his studio in Notting Hill, for a launch party for something he’d been involved with. A friend had invited me, knowing of my love of his work and thinking I’d get a kick out of it. We were chatting in a corner as guests swanned around, checking out the audio visual creation in a side room and admiring the huge collection of DATs on the wall, most of which were probably unreleased. We were talking about a clip of journalist Dick Flash interviewing Eno for a Warp Records promo film to go with his album, Small Craft on a Milk Sea.

In the clip Dick throws questions rapid-fire at Eno only to interpret his every answer with one of his own to the increasing annoyance of Brian. During the clip you soon realise that Dick is actually Eno interviewing himself, thus puncturing the usual pro-faced promotional guff that these exercises usually consist of. Suddenly at my side, there was Eno himself, joining our group and conversation, ‘Ah yes, Dick Flash, he was fun to play’. I can’t remember much of what else was said but I’d been to the Notting Hill Book Exchange on the way to the event and found a pop annual with a 4 page interview with Brian, post-Roxy. Producing it from my bag I showed him to which he even remembered the journalist who’d written the piece (and who had slagged him off late apparently). After cheekily asking him if he’d sign the book, he obliged and was gone, melting back into the party. The perfect example of meeting one of your heroes.

If you enjoy what we do here on Wyrd Britain and would like to help us continue then we would very much appreciate a donation towards keeping the blog going - paypal.me/wyrdbritain
Posted by ian holloway at 15:09