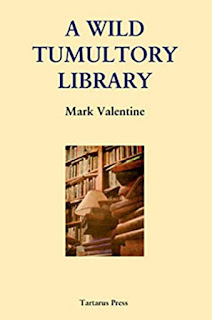 Read about the most dangerous man in the West; the poem written by a stuffed crocodile; the alchemist called the great-nephew to the Queen of Faerie; aesthetes, dandies, visionaries, anti­quaries, fortune tellers and fakirs, forgotten writers and much more.
Mark Valentine’s third collection of essays explores the curious byways of literature and lore in a similar manner to his earlier volumes Haunted by Books and A Country Still All Mystery.
Taking its title from an encounter in Thomas De Quincey’s youthful wanderings, Valentine’s writing shares that author’s delight in the arcane, the recondite and the obscure.

Mark's previous volume of essays 'A Country Still All Mystery' was one of the finest things I read in all of 2017.  In its pages he introduced us to authors such as Mary Butts and Randolph Stow alongside articles on more established names such as William Hope Hodgson, Lord Dunsany, Sarban and the inevitable Arthur Machen.  This third collection (there was a first called 'Haunted by Books' which I've yet to track down) continues in the noble bookman tradition of exposing the lives and works of little known authors to us all and 'A Wild Tumultory Library' is crammed with writers that with few exceptions - Elizabeth Bowen, L.P. Hartley, M.R. James, Oscar Wilde & Dylan Thomas - were entirely new to me.

Even when there seems little chance of ever finding the elusive authors for your own library there's much to enjoy here.  Mark is a delightful wordsmith and as such always a joy to read, the lives and ideas of his subjects make for engaging topics and you're always going to find at least one author that you're going to absolutely need to track something down by whether it be books by John Davidson, P.M. Hubbard, Richard Oke, E.V. Jones or, for me in particular, A.E. Coppard along with a couple of other possibles that I've jotted into my notebook.

Mark is a bibliophile par excellence but happily for us all is one for whom the joy in collecting is enhanced in the sharing of his finds and the revivification of those he enjoys and I for one thank him for it - my bank account less so but I'd rather listen to Mark than to him.

If you enjoy what we do here on Wyrd Britain and would like to help us continue then we would very much appreciate a donation towards keeping the blog going - paypal.me/wyrdbritain
Posted by ian holloway at 11:46