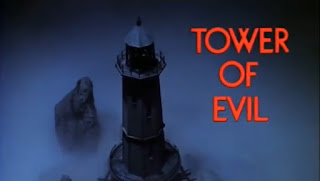 The film concerns two groups of teens - one group seen mostly in flashback thanks to some Prisoner-esque hypnosis techniques - who find themselves on the remote and rocky Snape Island, the first group for fun and frolics and the second for an archaeological dig.  Also accompanying the second group is a detective (Bryant Haliday) hired by the parents of the sole survivor of the first (Candace Glendenning) who is borderline catatonic and accused of her friend's murders. 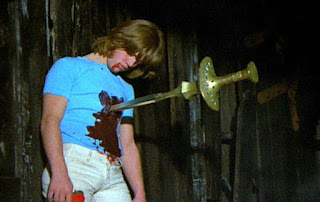 Like the contemporaneous 'Death Line' ('Raw Meat' in the US) the film shows a definite move away from the gothic creature feature trappings of the Hammer productions into areas more concerned with societal changes and the rise of newer lifestyles which, it seems, will be drenched in blood; an idea that would be returned to again and again in films such as The Texas Chainsaw Massacre, a seemingly endless procession of Friday the 13th and Halloween movies and exploitation movies galore.  Unlike 'Death Line' though it doesn't have an actor of the calibre of Hugh Armstrong to lend pathos to the murderous maniac. 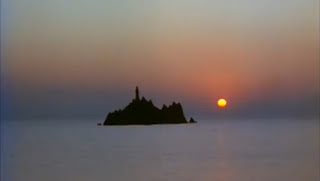 Despite being derided on it's initial release 'Tower of Evil' has aged remarkably well.  It's definitely a product of it's time and it gleefully engages in some, almost, equal opportunity sexploitation as there are bare boobs and bums - of both genders - galore including that of Robin Askwith who (thanks to the 'Confessions of a...' movies) has a bum that's been photographed more times than most people's faces - even in the age of the selfie. But it's well made and in amongst the campier actors there's a strong cast that includes such notables as Jill Haworth, Jack Watson  (Llud in Arthur of the Britons) Derek Fowlds (Bernard from 'Yes Minister'), Anna Palk ('The Earth Dies Screaming') and Dennis Price ('Twins of Evil') and a storyline that toys with the supernatural without ever fully embracing it leaving just a suspicion of what, perhaps, lies behind the murders.

If you enjoy what we do here on Wyrd Britain and would like to help us continue then we would very much welcome a donation towards keeping the blog going - paypal.me/wyrdbritain
Posted by ian holloway at 12:53