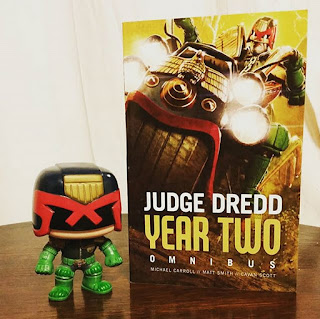 Rookie Year's Over
Mega-City One, 2081. Judge Joe Dredd’s been on the beat for a year. He’s made tough calls, tackled hard bitten perps, and seen the consequences of his choices come back to bite him.
But he’s not done learning yet. Dredd’s second year on the sked will see him back out in the Cursed Earth, where right and wrong are questions that go beyond the easy answers of the Law; he’ll tackle an apparent serial killer—or more than one?—targeting journalists; and he’ll take his first real beat down, leaving him bent and broken with only his badge and his conviction to protect him.

I read the first of these Dredd prose collections a couple of years back and quite enjoyed it - my review is here.  I had some problems with the rapidity of Rico's descent into corruption - to go that far under in a year seemed very unlikely - and in the first story here he's been arrested and is on trial and he's not the only one.

Tarred by their shared genetic heritage Dredd also finds himself under intense SJS scrutiny as he's packed off to the worst possible sector and then out into the Cursed Earth and all of this is just in the first of the three stories.  Indeed, Michael Carroll's 'Righteous Man' proved to be my favourite of the trio and that's no slight to the others as I pretty much enjoyed the hell out of this book.

2000ADs editor Matt Smith takes over for the second story - 'Down and Out' - as echoes of the Dredd movie (the good one) abound with him injured and making his way up (and then down again...and then up another) block full of gangers before the book closes with Cavan Scott's 'Alternative Facts' which, with it's thinly veiled Trump presidency plot, offers up a murder mystery, serial killer, fake news plot and a cathartic ending.

There's nothing here to shake the Dredd world to it's core but then that isn't really the point.  It's just a fun romp into the mysterious early years of our favourite fascist lawman.

If you enjoy what we do here on Wyrd Britain and would like to help us continue then we would very much welcome a donation towards keeping the blog going - paypal.me/wyrdbritain
Posted by ian holloway at 10:18