Geoff Love and his Orchestra

The first album I ever bought was a copy of 'Star Wars and other Space Themes'  by Geoff Love and his Orchestra.  It was about 1979 and I bought it in a jumble sale in the next town along from the one I grew up in.  I think I paid a staggering 10 pence for it but I can't be sure.  I remember my mother looking at it disdainfully and asking what on Earth I wanted it for which even at the time - at the grand old age of 9 - I thought was the stupidest question ever.  I mean look at it.  It's beautiful 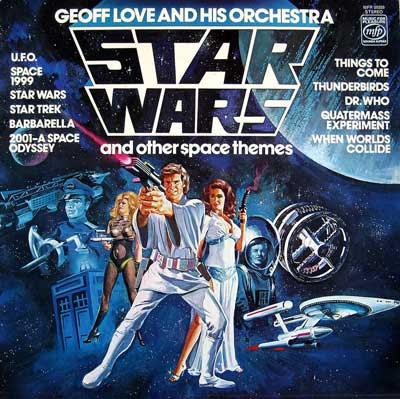 Almost everything about that cover was designed to ever so slightly avoid copyright infringement.

She relented and I walked home the happiest kid in town and only got happier when the needle hit the groove.  I cannot begin to tell you the joy this album gives me.  The version of the Doctor Who theme is to die for and Star Trek isn't too far behind.  This was the beginning for me of a love for rearranged cheesy lounge music that has never gone away.

A good few years later a friend - now sadly no longer with us - turned up at my house with a gift he'd dug out of the back of a cupboard where it had languished for about a decade.  He handed me the carrier bag and my breath caught in my throat as I pulled the ugliest LP cover ever made from the bag. 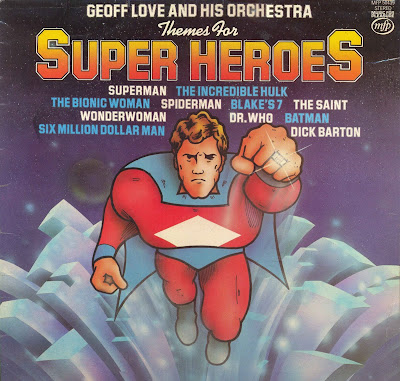 But, oh my.  the track listing.  The perfect, and I do mean perfect, sister album to the one I already had.

It's another frankly awesome experience of the finest aural cheese.  The drum break in Batman is blistering.  Steve Austin never sounded so kitsch, Wonder Woman would still be shaking her star spangled booty and Spider Man is doing anything a spider can but he's doing it with a strut.

There are a couple of odd choices in there that don't really live up to the superhero billing.  Dick Barton, The Saint and Blake's Seven not really living up to the title but album run times need to be filled and there were only so many superhero films and TV shows. 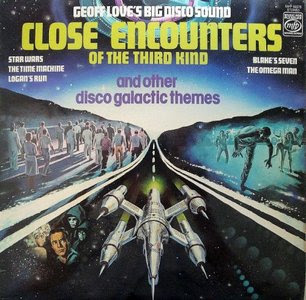 It was on the frankly insane 'Close Encounters...' album - credited to Geoff Love's Big Disco Sound - that Blake's Seven (check out the copyright free Liberator on the album sleeve) really came into it's own.  Along with the Omega Man theme it's the highlight of a collection of very unlikely disco reconstructions of sci-fi themes.

Through the rest of his career Love continued to churn out the reworked themes.  Westerns, TV shows, disaster movies all felt his baton waved over them.  The Bond one is another to look out for. 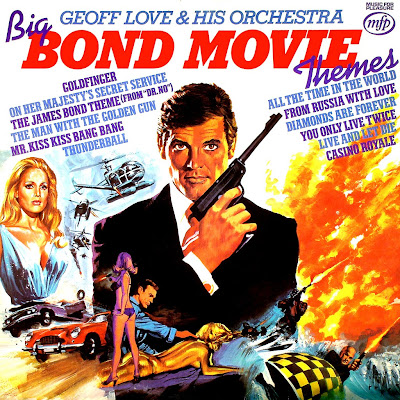 He also did many, many more albums of love themes, kids music, etc.  There're not 1, not 2 but 3 double LPs of Sing-Along Banjo Party, several with Shirley Bassey and one with the most 1970s British sounding titles ever 'The Biggest Pub Party in the World: 36 Boozy Ballads'.

Anyway,  if you live in the UK and have ever looked in the record racks of a charity shop you will have seen many of Geoff's albums.  I counted 23 in one box once. Most of them are pretty awful but in amongst them are some real gems like the ones above.  So, to celebrate Mr Love and his busy, busy orchestra here is a mix I've made featuring some of my favourites from the 4 albums I've shown you up there.  Hope you enjoy.

Quietude #14: Geoff Love and his Orchestra by Quiet World on Mixcloud
Posted by ian holloway at 18:23